For the love of the game

For the love of the game 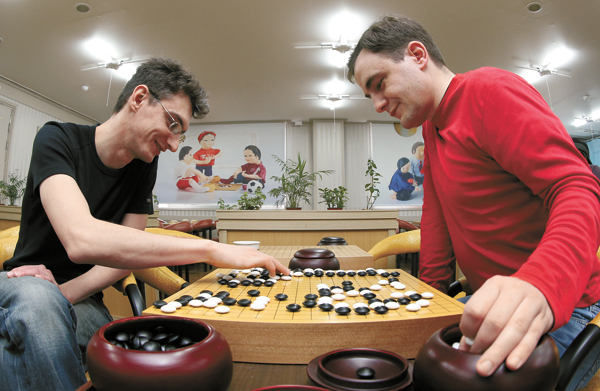 Thomas Ratz, right, and Julio Martinez hold a baduk match on March 26 at Six Brothers Baduk center in Seongdong District, Seoul. Ratz and Martinez are both enthusiasts of the strategy-based board game. By Kang Jung-Hyun

Julio Martinez and Thomas Ratz have fallen in love with Korean baduk, and their dedication to the game is evident.

Martinez moved to Korea from Spain two years ago in pursuit of it. His journey to this point began when he was just 8 years old, after his father introduced him to the strategy-based board game, showing him an article about baduk, also known as Go, and its correlations with computer programming.

His first real experience playing was in 2002 as a university student in Barcelona, where he joined an online baduk game. He was instantly intrigued.

“I used to play chess, but baduk was much more attractive to me,” he said. “I haven’t played chess since I started playing baduk.”

In the two-player game, each person takes turns placing black and white stones on different points on a grid. The goal is for one player to overtake the other by commanding a larger area of the board. The player who occupies more of the “house” is deemed the winner.

He started reading books written in English about the game to learn more about it, but it only piqued his curiosity. Martinez was particularly interested in Korean baduk, primarily for its fair playing style devoid of tricks and caveats in its rules. He first visited Blackie’s International Baduk Academy (BIBA), a baduk institution for foreigners in Sanbon, Gyeonggi, during a holiday from his job as a computer programmer.

But it wasn’t enough for him, so he decided to make a more permanent change and stay in Korea for a while to study the game.

Now he works at home as a freelancer and runs a baduk website for beginners called badukaires.com. Martinez has honed his skills over the years and now stands as 3-dan in Korea and 1-dan in Europe.

Still, he acknowledged that the most appealing part of Korean baduk was its fairness.

“A good move for me can also be helpful for my opponent,” he said. “Unlike chess, the strategy of baduk can be also applied to our lives.”

He added that while chess has its own specific strategy, Go has general proverbs that can be applied in life or even to other games. “Needed points before big points,” Martinez cited, or “When in doubt, play another place.”

It has helped him have more patience, he said.

Ratz’s story has parallels with that of Martinez. He visits Korea just to play baduk, mainly around the Korea Baduk Association in Hongik-dong, Seongdong District, in central Seoul.

Ratz, who works for an insurance company, found baduk through cartoons. A big fan of Japanese anime, his fondness for the game was cemented 11 years ago when he read “Ghost Baduk King,” a Japanese baduk-themed cartoon. He had also played chess and other online games before, but baduk’s charm was unavoidable.

“I like the way the game still goes on even if I lose one of my stones,” Ratz said. “In chess, it’s a huge loss when one of my bishops is taken. But in baduk, nobody knows how the game will end.”

When Ratz is in Korea, he visits the Korea Baduk Association to play games every Wednesday and Saturday.

And in fact, the reason why Ratz visited Korea is quite similar to why Martinez did, but the events were a little more serendipitous.

He flew to Korea last year, hoping he might meet professional players around the Korea Baduk Association. But on his way he got lost and happened to enter the cafe managed by Kim Ji-myoung, the host of Baduk TV.

He was subsequently introduced to a private baduk club run by Kim Seung-rae, the professional baduk player, and over 25 days of his 30-day stay in the country, he attended the club. “I lost a lot of games, but I obviously got better,” Ratz said. “Good play is not the game I won, but the game I learned a lot from with a lot of good moves.”