Another drone found crashed near the DMZ

Another drone found crashed near the DMZ 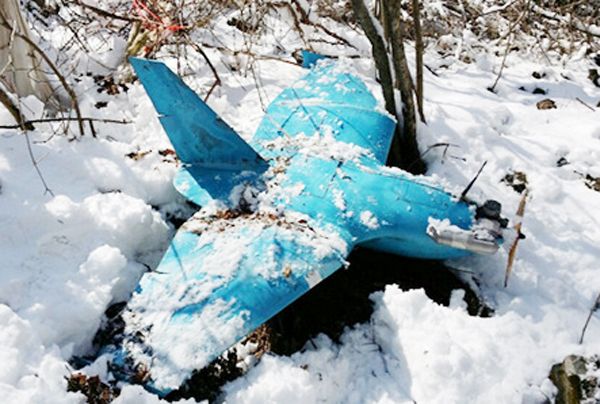 Another drone was found in the border region of Samcheok in Gangwon in October, the Ministry of Defense announced yesterday. [NEWS1]

An unmanned aerial vehicle, or drone, was found in a border region of South Korea last October similar to the one that crashed in Paju near the demilitarized zone on March 24, and is also believed to be North Korean.

The man who found it, a 53-year-old resident of Samcheok, an eastern coastal city in Gangwon located 130 kilometers (80.7 miles) away from the DMZ, reported the discovery to the government after reading about the drone found in Paju and another found on Baengnyeong Island last Monday.

Kim Min-seok, spokesman of South Korea’s Ministry of National Defense, said at a briefing yesterday that the military recovered the drone from a location 940 meters (3,083 feet) up a 1,040-meter-high mountain in Samcheok.

“The drone is the same kind as the one that crashed in Paju city, which was blue-colored and triangular-shaped,” Kim said. “There is a hole in the new drone, which was assumed to be equipped with a digital camera, but there was no camera inside.”

The last man who found the drone reported the incident to the government on Thursday.

He told the military the drone crashed into the mountain on Oct. 4, 2013, while he was gathering medicinal herbs nearby. He said it was equipped with a Canon camera, but he discarded the camera when he found it was wet with water.

The man apparently took the camera’s memory chip out, erased it and used it himself.

He told the military that it had contained photos of the Gwangdong dam in Samcheok and some beaches assumed to be on the east coast.

The military checked the resident’s identity and sent investigators to the mountain last week, Kim said. The drone was discovered yesterday hanging from a parachute on a tree covered with snow.

“The military is focusing on the possibility that this drone was also sent from North Korea and is analyzing its flight’s purpose and capabilities,” Kim said. “We will announce the outcome of our analysis within this week.”

The military found a Canon camera in the drone that crashed in Paju on March 24. A total of 193 images were found on the camera, including major landmarks in central Seoul such as the Blue House, Gyeongbok Palace and some residential apartments in Eunpyeong District, northwestern Seoul, according to Seoul officials.

Another drone equipped with a digital camera was discovered on Baengnyeong Island in the Yellow Sea on Monday, the same day the two Koreas exchanged artillery fire across their disputed maritime border. Its camera contained about 100 photos of the frontline islands of South Korea in the Yellow Sea, where Seoul deploys several military units.

On the Paju drone, Seoul found six foreign fingerprints and North Korean-style Korean words written on the surface of its lithium-ion battery.