Play delves into a well-aged love

Play delves into a well-aged love 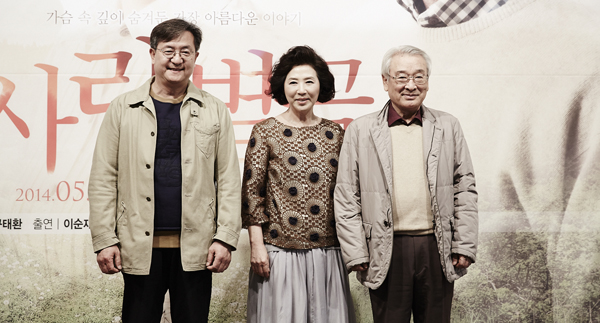 Veteran actor Lee Soon-jae, 78, who is more popular than ever after appearing on the hit reality program “Grandpas Over Flowers,” will get a little serious on stage as a brusque yet caring husband. This “simple and beautiful love story of an elderly couple,” he says, was attractive enough for experienced actors to “definitely make time for.”

“Love Tune,” based on a novel by Jang Yoon-jin, is a play that has been raising anticipation among theatergoers, not only because of Lee but because Go Doo-shim, 63, will be the female lead, Soon-ja. And it will be the first time the two veterans will meet on stage as a couple.

“When I heard that Lee Soon-jae would make time for this play, I immediately thought, ‘I have to do this as well,’?” said Go at a press conference last week. “Everyone knows about his acting ability, and it’s a great honor to perform together.”

Lee echoed that sentiment. “Go once acted as my daughter-in-law in a television drama in 1995,” said Lee.

“That time, my wife was played by Kang Boo-ja, and you can’t imagine how much I wanted them to switch the roles,” Lee joked.

Lee said that at his age, it’s quite difficult to appear on stage daily for more than three months, so he requested a double - Song Young-chang - to support him.

“Love Tune,” according to organizers, is the love story of an elderly couple. Soon-ja, played by Go, has been married to her blunt husband, Mr. Park, for many years, but she meets her first love, Mr. Kim, and considers running off with him.

Mr. Park - who hardly ever expresses his love for his wife - discovers Soon-ja’s affair. Rather than exploding with anger, Mr. Park tries to show how much she means to him.

“In Korea, married couples of many, many years hardly say ‘I love you’ or express their feelings for each other,” said Song. “Husbands, especially, can be so brusque they hardly hold their wife’s hands or try to express their love, but I’m sure they feel love inside. On the other hand, for the younger generation these days, it’s so easy for them to say ‘I love you.’ Maybe too easy. Young audiences will realize while watching this play what sincere and true love is between a married couple and I hope they realize it.”

Director Gu Tae-hwan says he wanted to see the two veterans on the same stage before they retire.

“I worked with Go seven years ago, and I was in a total shock - shocked by how she interprets the character and makes it her own,” said Gu. “It’s difficult to express energy and delicacy at the same time, but Go does that perfectly. To see her next to Lee will be a great opportunity for the younger generation in the theater industry, like myself.”