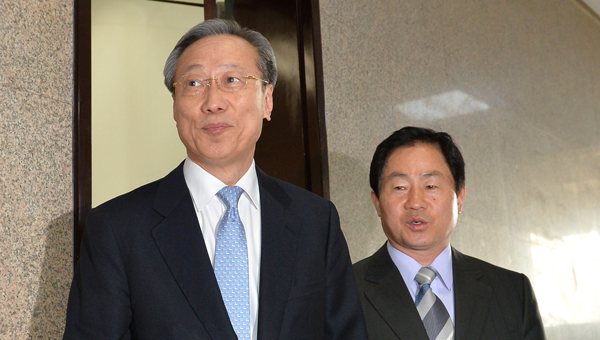 President Park Geun-hye yesterday rejected Ahn Cheol-soo’s request for a meeting to discuss the controversial party nomination system for the June local elections, making it clear that she will not be dragged into a political battle over a 2012 campaign promise she has made and is breaking.

Instead, the president sent her political affairs secretary, Park Joon-woo, to the National Assembly to have a closed three-way meeting with the co-leaders of the opposition New Politics Alliance for Democracy, Ahn and Kim Han-gill. The two men have been crying foul recently over the ruling Saenuri Party’s reneging on an election pledge to not nominate candidates for city, district and county councils.

“The issue of ending party nominations for lower-level elected offices is related to amending the national election law, which is up to the ruling and opposition parties [at the National Assembly] to do as the first step,” the presidential secretary was quoted as saying during the meeting by Blue House spokesman Min Kyung-wook.

Park, a former diplomat, also said there was no one who insisted on keeping campaign promises like the president, an assertion immediately derided by the two.

“That [claim] is far from what we think,” Kim was quoted as saying by Keum Tae-sup, an NPAD spokesman.

President Park refused to discuss the issue with Ahn after he made an unannounced visit to the Blue House on Friday, an unprecedented move by a leader of an opposition party. Ahn was ushered into a visitor’s room, where he wrote a formal request to meet with Park.

“This was neither an apology nor an expression of regret [by President Park for breaking the promise],” Ahn told reporters after the meeting with the political affairs secretary yesterday.

During the 2012 presidential election, both the Saenuri and the Democratic Party promised they would stop nominating candidates for city, district and county council members. (The DP merged with Ahn’s supporters to create the New Politics Alliance for Democracy or NPAD.) The idea was to remove party politics from elections at the grass-roots level and end certain corrupt practices.

The Saenuri Party, however, went back on its promise in February, fearing that party-less elections would be a mess. If the national parties don’t control nominations, more than one candidate can run on the conservative or liberal side, splitting the vote. And in a polarized political environment like Korea’s, voters are used to voting based on the ideology of the candidate - conservative or liberal.

The Saenuri Party instead proposed an open primary system for the June local elections in which people with no affiliation to the party can cast ballots to elect party candidates.

The major opposition NPAD, which commands the loyalty of 130 lawmakers, has suffered in recent days from internal disputes over whether to keep its promise or follow the Saenuri’s lead to back off from it. The public doesn’t seem to be engaged by the no-nominations reform, and the Saenuri Party doesn’t seem to be suffering from reneging on its promise. Some analysts say the public considers the campaign promise a populist gimmick.

“If the NPAD is going to keep its promise on no-party nominations, it will experience a humiliating defeat in the local elections,” said Cho Kwang-hwan, head of the political consulting firm Makers 10, who called the opposition’s campaign strategy to keep pounding the Saenuri on the nomination process “a politically wrong choice.”

“An election outcome is often swayed by a margin of 1 or 2 percent of votes,” he said. “Without the nominations from the main parties, more than one candidate from the opposition will take part in the races, which will split votes by liberal voters. It will produce an overwhelming victory for the ruling party in the June elections.”

Ahn said he is contemplating the next move for the NPAD.

When asked if he could renege on the nomination promise, Ahn stayed mum.