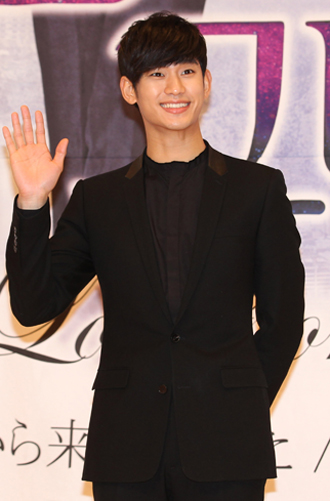 Hallyu, or Korean Wave, heartthrob Kim Soo-hyun repaid the tremendous adoration he has received from his Chinese fans by attending a charity fashion show held by Italian luxury brand Gucci amid his hectic schedule.

“I have received great love and attention from so many people these days, and I am happy to be part of this heartwarming event where we can provide better conditions for underprivileged children,” Kim said Tuesday at the event, which was held in Beijing.

The 26-year-old actor donated 1.2 million yuan ($193,755) with Gucci to the China Children and Teenager’s Fund, a charity foundation that fosters and educates underprivileged children in China.

Chinese model-actress Angela Yeung, better known by her stage name Angelababy, who has modeled with Kim before, also attended the show.

Kim is currently hosting a series of fan meets around nine cities in seven Asian countries. His next destination will be Indonesia, followed by Singapore and Japan.