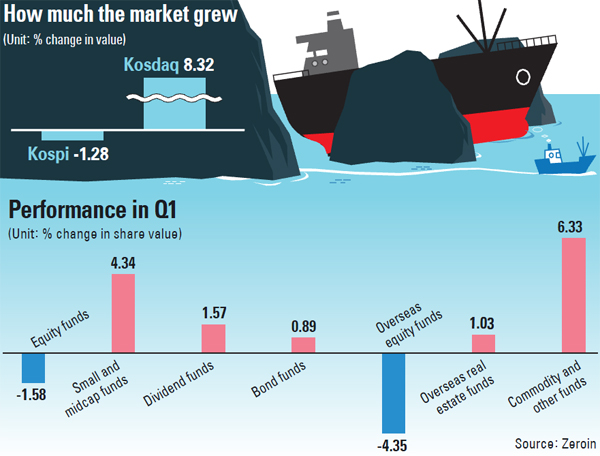 Since the beginning of the year, global stock markets have faced many shoals, starting from the instability of emerging markets because of the tapering of quantitative easing in the United States since December, the tension in Ukraine and China’s slowing economy.

Foreign investors here pulled back from the stock market when Korean companies’ earnings in the fourth quarter proved to be an unpleasant shock.

When navigating dangerous waters, smaller ships have it easier; they can change course quickly and respond to unexpected changes. Larger ships are slower to react to changes at the helm. The analogy proved true for Korean companies and for the mutual funds market here; funds investing in small cap and midsize issues did better than those at the high-capitalization end of the market.

Reviewing financial product performances, the JoongAng Ilbo and Zeroin, a fund investment analyst, found that equity funds overall lost 1.6 percent of their value in the first quarter, but those specializing in small- and mid-cap funds showed an average 4.3 percent gain. One reason investing in the small guys turned out to be profitable was because the Kosdaq, where shares of smaller companies are traded, had a sparkling quarter. It grew 8.3 percent, an exceptional performance when compared to the main board, where the Kospi index fell 1.3 percent during the same period.

Entertainment and casino stocks and bio and health-related stocks help boost the Kosdaq in the first quarter. One common quality of many small stocks is that they are not sensitive to the global market, unlike shares of major exporters such as Samsung Electronics and Hyundai Motor.

Expectations of gains in those small and mid caps also rose because the Park Geun-hye administration, since the beginning of the year, has emphasized support for the domestic market.

But the marine navigation analogy can be extended even further. The highly profitable small- and mid-cap funds in the first quarter were all relatively small. The top performer among those funds last quarter was Dongbu Bio Health Care, which gained 11.3 percent.

“While the stock markets’ index moves were limited, some individual stocks were very active,” said Hwang Yoon-ah, a Zeorin analyst. “It was easier for smaller funds to react quickly to rapid changes than for larger funds.” 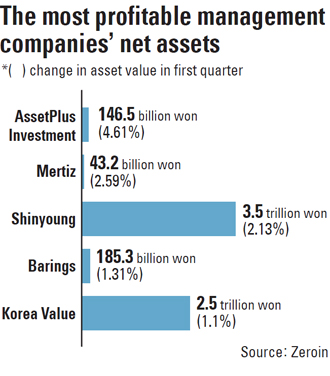 The figures show that in the first quarter, the most profitable mutual fund investments were those that chose stable growth issues for their portfolios. Funds that emphasized stable growth over high growth topped the list of small- and mid-cap performers.

Some experts say as a society ages, investors tend to invest more for stability than for high returns.

Oh On-soo, an analyst at Hyundai Securities, said the number of investors looking for stable dividends is growing. “By the same reasoning, there is a stronger preference for preferred stocks, which give better [dividend] returns than equity funds.”

Among asset management companies, AssetPlus topped the lists with 4.6 percent profit growth; Meritz came in second at 2.6 percent. One similarity of these companies is that they have relocated out of the Yeouido financial district and manage a small numbers of funds.

Funds that invested in overseas markets saw comparatively poor performance. Overseas equity fund growth in the first quarter was a negative 4.4 percent. Funds investing in China issues fared the worst, losing an average 7 percent. But not all those funds disappointed; those investing in India posted a 10 percent increase. India has been rising in investors’ esteem lately as an alternative to China.

Analysts’ sentiment last year tended to favor investments in developed economies, which are on a recovery track. The U.S. Fed’s gradual end of its easy-money policies also suggested that emerging markets would feel some pain. But that turned out not to be entirely true; in addition to India-focused funds, those investing in Taiwan (up 4.5 percent) did much better than the average of funds concentrated on developed market companies.

Although there are growing expectations that emerging markets may spurt, some experts are cautious as instability in those markets is still a risk. “There is a possibility that the crisis in emerging markets could repeat itself several times until the U.S. tapering ends,” said Kim Hoon-gil of Daishin Securities.

The growth of small- and mid-cap funds could also change with some possible shifts in the market. Foreign investors, who were net sellers in the first quarter, have reversed course since March 26. They have loaded up on Korean stocks for 12 consecutive trading days, particularly those of blue chips such as Samsung Electronics.

With interest in blue chips growing, small- and mid-cap shares - and the funds that invest in them - may suffer, according to some analysts.