Moore hopes to break a Par 3 jinx at the Masters

Moore hopes to break a Par 3 jinx at the Masters 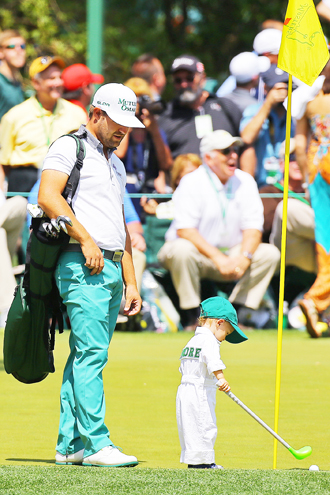 Ryan Moore watches while his son Tucker uses a toy driver to putt for dad on No. 1 during the Par 3 contest at Augusta National. [AP/NEWSIS]

With friends and family members in tow, Ryan Moore made memories at the Masters on Wednesday.

Moore shot a 6-under 21 to win the Par 3 tournament at Augusta National, calling it a “perfect practice day.’’

No one should consider it the perfect omen for winning golf’s first major, though.

Since the Par 3 contest began in 1960, no winner has gone on to don the green jacket later in the week. Raymond Floyd (1990) and Chip Beck (1993) both won the mid-week tournament and finished second on Sunday. The Par 3 could be more of a curse than a forecast for the Masters.

“I’m not afraid of it,’’ Moore said. “You never know. Someone has got to break that curse at some point in time, so hopefully it’s me, if I end up winning. Who knows? I might go shoot 8 under or something, make a couple hole-in-ones. We’ll see.’’

Moore made a relatively short putt on the ninth hole to get to 6 under. He finished one shot behind the Par 3 record held by Art Wall (1965) and Gay Brewer (1973).

Moore played the round with his 18-month-old son, Tucker, who drew a lot of attention as he pounded his plastic driver all around the course.

“It was fun having my boy out there and playing a round, you know, playing with a couple of friends,’’ Moore said. “That’s what it’s for, to kind of make you relax a little bit and just go and enjoy yourself the afternoon before.’’

Kevin Stadler and Fuzzy Zoeller finished tied for second at 4-under 23. Bernhard Langer, Joost Luiten and Victor Dubuisson were another stroke back.

Separately, the Masters is the only major that doesn’t have a rules official assigned to every group on the golf course.

And it will stay that way.

One of the suggestions that emerged from the Tiger Woods’ ruling last year was that it might have been avoided if a rules official had been on the scene. Woods hit a wedge to the 15th green that hit the flagstick and caromed into the water. He said he purposely took his penalty drop a few yards back to avoid hitting the pin again.

That was a violation - the rule requires the drop to be as near as possible to the previous spot - and it led to a two-shot penalty, which was assessed after he signed his card. He was not disqualified under Rule 33-7 because the rules committee felt it erred in not talking to Woods before he signed his card.

Augusta National, like the other majors, brings in rules officials from tours and golf organizations around the world.

“We have approximately 60 officials on the course, significantly more than any other tournament,’’ Masters Chairman Billy Payne said. “We think we do it pretty good with the familiarity they acquire for the specific holes.”