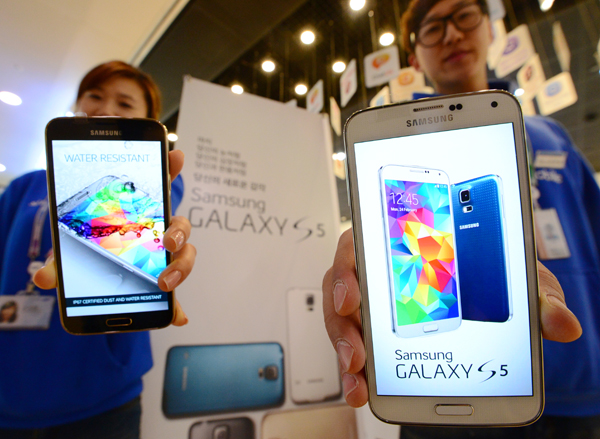 Samsung Electronics employees are holding up the latest Galaxy S5 at the company’s store in Taepyeongro, central Seoul yesterday. The latest smartphone has gone on sales at 125 countries including the U.S., China and Russia. [NEWS1]

Samsung Electronics launched the Galaxy S5 with heavy marketing campaigns around the world yesterday, amid intensifying competition from lower-end smartphones from Chinese makers.

The phone was released in 125 countries yesterday, a record number of countries for a release of a Samsung smartphone, the Suwon, Gyeonggi-based company said in a statement.

The countries included not only advanced markets such as the United States and Europe but also the Middle East, Latin America and most Asian markets. They will be joined later in the year by 25 or so other countries, the company said.

Samsung’s previous premium devices, the Galaxy Note 3 and the Galaxy S4, were launched in 58 and 60 countries, respectively.

Customers purchasing the S5 also get free or discounted apps worth 600,000 won. It is the first time Samsung is launching a phone with such promotional giveaways. In Korea, where mobile carriers began selling the phone on March 27 without an official blessing from Samsung, 200,000 won can be slashed from the purchase price depending on the contract signed with the mobile carriers.

Samsung has reportedly secured 10 million preorders, which are expected to turn into sales within the next 25 days.

Many smartphone makers are looking to the lower-price mass market for growth, as the mobile market in general, in particular for premium handsets, is showing signs of saturation. According to the market research agency IHS, growth in global revenues of mobile devices will slow from 22 percent last year to 9.5 percent this year, before it contracts by 1.5 percent next year.

Samsung Electronics’ operating profit hit a record high of 10.16 trillion won in the third quarter before it fell to 8.31 trillion in the fourth quarter, causing an “earnings shock” to the market. It recovered slightly to 8.4 trillion won in the first quarter. Analysts believe the Galaxy S5 will help Samsung turn around its profit fall.

“Samsung’s operating profit is expected to grow gradually over the quarters this year, and sales of the Galaxy S5 will further boost it in the second and third quarter,” said Lee Sun-tae, an analyst at NH Investment and Securities.

Sales of the Galaxy S5 may be boosted by partner products. Samsung released the Samsung Gear 2 smartwatch and its slim Gear 2 Neo, as well as a smart wristband, the Samsung Gear Fit, globally yesterday.

The so-called wearable devices have functions that link them to the Galaxy S5 phone.

“The refined design and technological innovation of our new Galaxy S5 and Samsung Gear devices are the direct result of Samsung listening carefully to what consumers wanted in the next generation of mobile technology,” said Shin Jong-kyun, CEO and president of IT & Mobile Communications division at Samsung. “We carefully crafted each device to offer a sophisticated, superior mobile experience that lets consumers stay connected in their own way to focus on what really matters to them.”