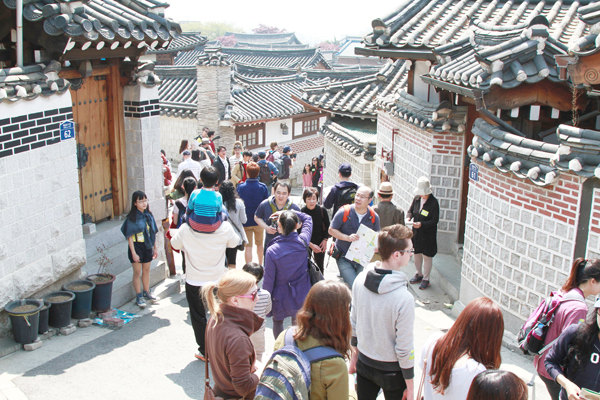 Expats in Seoul participate in a charity walkathon around Bukchon, central Seoul, organized by the Korean Association of Foreign Language Academies last year. This year, the event will be held on May 11. Provided by Kafla

Last Sunday afternoon in Dangjin, South Chungcheong, nearly a thousand people squared off, half on either end of a mammoth rope 200 meters long (219 yards) and weighing about 40 tons. After a loud count of three, each side pulled in either direction in a giant tug-of-war contest, with the winners of the best-of-three matches declared the strongest.

The event was part of the annual Juldarigi Festival, a tug-of-war contest that dates back more than 500 years, and foreigners are increasingly getting involved in the fun.

However, understanding the old tradition can be tough for people who don’t know the language. Although the contest itself lasts just a few minutes, the rituals and ceremonies associated with it, including pulling the huge rope across a field to the contest location, last around three hours.

“I thought that was the end of the festival and just waited for the bus to depart at 5 p.m.,” said Sours Por, 23, a Cambodian student who studies law at the Transnational Law and Business University in Goyang, Gyeonggi. “But I saw the rope coming into the venue and realized that they were bringing it in by hand. I thought they’d use a truck or something.”

“Although we had to wait, pulling the straw-woven rope was a fun experience,” said Puteri Safia, 19, from Malaysia, who studies at Seoul National University. “And, guess what, my team won.”

For the 100 foreigners from 22 countries who participated, it was a long day, with two chartered buses departing from Gwanghwamun in central Seoul in the morning. Most were international students, experiencing their first trip outside of Seoul, and certainly their first Juldarigi Festival. Not only was the trip free, but in the bus each participant was given an envelope with 6,000 won ($5.75) in cash for lunch.

“I’ve been in Korea for about two months and it was my first time to actually go outside of Seoul,” said Puteri. “I wanted to participate in this event because we can not only experience Korean traditional culture but also make many friends.”

Upon arrival in Dangjin around 11 a.m., the foreign students went to the festival’s main venue where hands-on events were taking place, like weaving straw ropes and a blacksmith experience zone. An hour later, the group was guided to a small nearby field where city officials were holding a gosa, the shamanistic ritual offering food to the spirits to avoid misfortune and bring good luck to the festival. After the gosa, hundreds of people were given out pairs of gloves so that they could help pull the gigantic rope to the venue. Although just a 15-minute walk away, hauling the 40-ton rope took about three hours. With a cry of “yo-ho,” accompanied by cheerful pounding of Korean traditional instruments, everyone helped to pull the rope.

From left to right: Reshima Kamath, 27, a student at Seoul National University, dances a traditional Indian dance during the “Express Korea” competition organized by the Korea International Student Support Association. Puteri Safia, 19, from Malaysia, tries to pull the rope during the tug-of-war event in Dangjin, South Chungcheong.

“I gave up after 10 minutes of pulling the rope,” said Sours. “But watching the villagers and visitors joining forces and hearts to pull that gigantic rope for three straight hours was just stunning.”

The students attended the festival thanks to the Korea International Student Association (Kinsa), one of seven groups trying to help foreigners adjust to life in Korea that was selected this year to receive financial support from the government. The selection was made by the Korean Culture and Information Service (Kocis), a government institution under the Ministry of Culture, Sports and Tourism.

Kinsa, for instance, was established in 2010 by Jason Lee “to support foreign students who are currently studying in Korea through various activities to adjust to life in Korea,” Lee said.

Kinsa’s website has a wide range of helpful information, like networking events, trips to festivals around the country and job opportunities. All the events are free to international students.

Although it started off small, it now has many foreign students who are members. “There are about 10,000 international students that we cater to,” said Lee. “We expanded so abruptly there are some shortcomings, but I believe we are getting there.”

Those growing pains were on display on Sunday. Although many students said they enjoyed experiencing Korean culture and going outside of Seoul, the program was a bit disorganized. The students were simply dropped off and picked up later, with little guidance given about the long day’s events. Lee admitted it would have been better if they researched more about the festival.

“We should have studied more about the festival and its activities beforehand, but it was quite different to what we’ve heard from the festival organizers,” said Lee. “We had no idea that the participants were the ones that had to pull that rope to the venue for three hours. We’ll make sure to have more information for our next trips.”

Lee said there will be about five more trips to cultural festivals this year.

With the government’s financial support, Kinsa said it will concentrate on publishing the online magazine “Voice,” which focuses on informative articles and photographs about Kinsa’s activities.

Another association that supports international students in Korea is the Korea International Student Support Association (Kissa). Although the name of the group is similar to Kinsa, organizers said their programs are different.

“With government support, we will have a competition on ‘hidden secrets,’ cultural heritage or historical sites in Korea that are less well known,” said Park Jong-chun, secretary general at Kissa.

Park emphasized that Kissa focuses on having Korean students and international students participate together to help create international friendships.

Park said the association conducted a survey last year and found that many foreign students, despite attending Korean schools, find it difficult to make Korean friends.

Kissa also holds events that are not funded by the government, such as a presentation on May 2 by Saenuri Party lawmaker Jasmine Lee, a woman born in the Philippines who holds a seat in the National Assembly, to talk about the “Korean dream.” It will also hold the Seoul International Students Cultural Festival on May 18 at World Cup Stadium in western Seoul, where booths representing different countries will introduce their cultures and hold cultural performances.

Another organization, Community Korea, focuses on networking events for expats and Koreans, but does not concentrate on students. It offers diverse information about living in Korea and has been holding language exchange gatherings. With government support, Community Korea said it added language exchange gatherings to other programs, like temple stays and DMZ visits, so that “participants can talk about Korea after hands-on experiences.” This Saturday, it will hold its first temple stay trip, and a DMZ tour will be held in May.

“We are also planning to establish a community portal site to attract more foreign visitors, like students, as well as patients who want to visit Korean hospitals,” said Kim Tae-sun, an official from Community Korea. “We’ll also help Koreans or a Korean company who wish to go overseas for business by providing abundant information.”

The Korean Association of Foreign Language Academies (Kafla) is composed of the heads of private English academies, or hagwon. This group has been active in holding charitable activities, inviting expats to participate, including many English teachers. Some of their most popular events are charity walkathons, which it has been holding since last year, taking people on scenic trips through Bukchon in central Seoul and Seoul Fortress to raise money to help build a nursing school in Nepal.

Foreign students studying in Korea were taken by the Korea International Student Association to visit the Juldarigi Festival in Dangjin on Sunday. Provided by the organizers

“Although what the government provides is only a small portion of our needs, we are trying to expand our projects so that we can make good use of the money to promote Korea and its culture as well as fund-raise to help other countries,” said Chung Jeong-hee, the head of the social service team at Kafla.

Other selected associations are Omnis Korea, Seoul University’s Institute of Latin American Studies and the Royal Asiatic Society in Korea.

Yoon Sun-hwa, an official at Kocis, said only 35 million won was used for projects this year, but added it may go up if the results are positive.

“The selected associations will present us with their results at the end of this year, and we’ll decide then if it is worth the budget,” said Yoon.