In cancer struggle, a gender imbalance

In cancer struggle, a gender imbalance 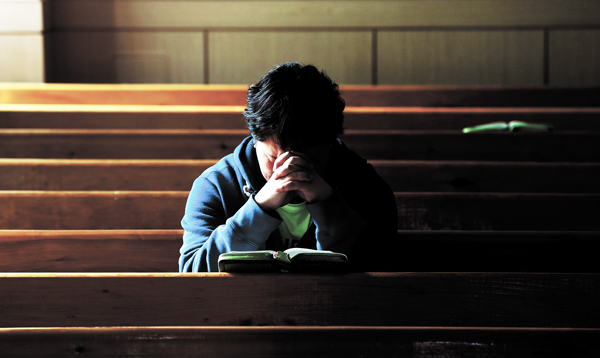 A woman in her late 40s from Gyeonggi, who asked to remain anonymous, recently visited a legal aid center for family relations, which provides services and counseling for those looking to file for divorce.

A mother of two girls, she was considering ending her 25-year marriage.

The reason, the woman tearfully confided, was that her husband had become a “totally different person” since she was diagnosed with breast cancer in 2012.

“My husband once told me to hurry up and die so that he can freely meet other women,” she said. “I don’t think I can live with him anymore.”

But a study from Yonsei University’s College of Medicine that analyzed 623 cancer patients - 226 males and 397 females - showed that women may have it worse when it comes to handling and coping with cancer, with family and domestic expectations adding additional stress to treatment and care.

Twenty women, or 5 percent of the respondents, answered they were either divorced or separated. The corresponding figure for male patients was seven, or 3.1 percent. Women were also 1.6 times more likely than men to have fractured relationships with their spouses.

“[Many] female patients feel as though their femininity has been affected or taken away when they hear the news [that they have cancer],” said Park Eun-chol, a professor from Yonsei University’s College of Medicine. “The sting contributes to widening the chasm between [them and their husbands], where the man then goes on feeling out of place, which leads to a divorce.”

One woman, surnamed Park, who was diagnosed with breast cancer in June 2011, said her illness had also taken a toll on her marriage.

“My husband doesn’t even come near me anymore since my hair fell out from chemotherapy,” she said. “We used to go to couple gatherings together, but he goes alone now.”

On an online social networking website for cancer patients, one user wrote that her husband once shouted: “Do you know how selfish you are? You should have offered a divorce!”

There are numerous cases in which women divorce their partners after cancer strikes, but such incidents are rarely talked about because many ex-husbands are afraid they’ll be blamed by society, said Kim Sam-hwa, a lawyer from Somin Lawyers Office.

“Men usually state other reasons for the divorce in order to avoid ethical condemnation,” she said.

But even in instances in which couples manage to maintain their marriages, it doesn’t mean they’re always truly content.

A survey conducted by the JoongAng Ilbo shed light on the ordeals female cancer patients often endure, due in part to their household’s expectations on them to carry on as usual with housework, child rearing and even their own care. 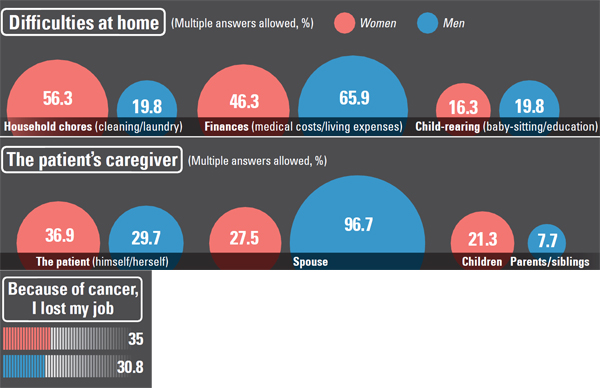 Most women (36.9 percent) said they looked after themselves, while their male counterparts mostly had their wives acting as their main caregiver (96.7 percent). Household chores were also mostly the women’s duty, with 68.1 percent answering that they were in charge of those responsibilities; that number tapered to 7.7 percent for men.

While 25 percent of the female respondents said they took care of their children, only 13.8 percent of men answered that they did.

And when asked what the most stressful part of being sick was, more than half of female respondents answered housework (56.3 percent), while the male patients noted living expenses (65.9 percent).

“I prefer being hospitalized,” said one woman, surnamed Choi, 45, who was diagnosed with lung cancer late last year. “It’s hard for me to breathe, yet I have to cook for my children.”

She added that she had not hired a caregiver or a maid because “that costs money.”

Another woman, Kim, who was diagnosed with cervical cancer in 2004, said: “I might not have enough strength to eat my own food, but the housekeeping is still my job.”

“When it comes to quality of life, male patients are better off than females,” acknowledged Yoon Young-ho, a family medicine professor at Seoul National University, because women are prone to take care of themselves or have their mothers look after them, whereas men mostly have their wives acting as caregivers.

The stress derived from the physical and psychological pain female patients must endure often leads to depression, which can critically affect cancer treatment, experts said.

“Feeling depressed weakens immunity levels for cancer patients,” said Yoon Se-cang, who works in Samsung Medical Center’s psychiatry department, adding that many female patients, despite the high survival rate, end up falling into that trap even after remission.

The Ewha Womans University Cancer Center for Women revealed in 2011 that of the 100 female cancer patients tested for research purposes, 57 turned out to suffer from some sort of mental disorder, much of the time resulting from suppressed anger, and 28 more were suspected of having some sort of similar condition - bringing the total to 85 percent.

“My body was swelling up from the hormone drugs, but my boss told me to lose weight if I wanted a promotion,” said one breast cancer patient, surnamed Park, 38.

Psychological therapy is offered in many U.S. cancer treatment centers like the MD Anderson Cancer Center in Houston, Texas, said Professor Park from Yonsei University’s College of Medicine, who compared a system like that to those in Korea.

“[The government should] offer incentives to hospitals with psychotherapeutic programs and have those treatments covered by the national health insurance,” in order to ease female cancer patients’ pain and stress, he said.