With a new curveball, Tigers lefty turns it around

With a new curveball, Tigers lefty turns it around 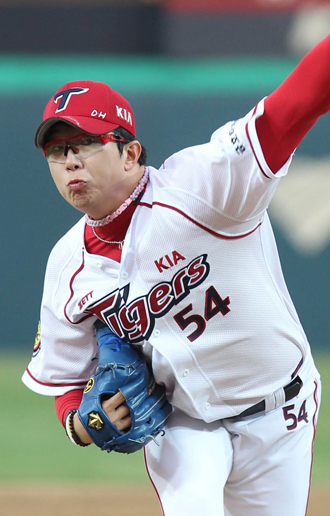 In 2009, Kia Tigers fans were excited when young left-hander Yang Hyun-jong had a breakout season, posting a record of 12-5 with a 3.15 ERA. With fastballs hitting 150 kilometers per hour (93 miles per hour) and sharp-breaking sliders, fans and analysts predicted that Yang would join Ryu Hyun-jin of the Hanwha Eagles, now with the Los Angeles Dodgers, and Kim Kwang-hyun of the SK Wyverns as the best southpaw starters in the Korea Baseball Organization.

He continued to roll in the 2010 season with a record of 16-8 and an ERA of 4.25 in 30 games, but his numbers eroded over the past three seasons as he was dogged by left shoulder problems and other injuries.

When Ryu and Yoon Suk-min of the Tigers left for Major League Baseball and Kim of the Wyverns struggled with injuries, the KBO was left without a dominant Korean starter. The title of “ace” on many teams went to foreign pitchers like Dustin Nippert of the Doosan Bears and Brandon Knight of the Nexen Heroes.

And though it is early in the season, it looks like the 26-year-old Yang is poised to regain his early success. In three games, he is 2-1 with an ERA of 0.45, giving up one earned run in 20 innings of work and striking out 21.

Yang always said his best weapon was his fastball, but hitters soon started laying off Yang’s nasty sliders and sitting on his fastball. Yang’s 2010 season 4.25 ERA skyrocketed to 6.18 in 2011 and was 5.05 in 2012 when he also spent time in the Tigers’ bullpen.

Yang decided to expand his repertoire. During the offseason, he learned to throw a curveball from pitching coach Kim Jung-soo, who was a master of the hook when he pitched for the Haitai Tigers.

Having more weapons on the mound soon paid off. In the Tigers season opener April 1 at Gwangju-Kia Champions Field against the NC Dinos, Yang threw 122 pitches and 11 of them were curveballs, just enough to keep the opposing hitters on their heels.

Yang gave up five hits and struck out nine in eight innings of work as the Tigers won, 1-0.

“He learned the curveball very quickly,” said Kim. “I think that slow breaking ball gave him better tempo in pitching and also showed hitters he is no longer only a fastball-slider pitcher. Since he got more confidence in his curve, he has started throwing it more with two-strike counts.”

Yang also knew how to throw changeups, but he had difficulty with control. Now that he can throw curves anytime, his changeup has become more effective.

“We can’t say his changeups are above average, but they are good enough to give some headaches to hitters who now have to think about more types of breaking balls,” said analyst Lee Hyo-bong.

Ryu dominated the league with his fastball-changeup combination, but one difference from Yang was that Ryu got a lot of ground-ball outs, especially from the bottom third of the batting order, which allowed him to throw fewer pitches.

“Ryu strikes out many hitters with his changeups and sliders,” Lee said. “But he also induces many ground-ball outs. If Yang can learn to do that, his dream of playing in the big leagues might be realized.”

Yang will be a free agent after the 2015 season.