Frantic search and rescue operations are conducted yesterday in waters off Jindo County, South Jeolla, around the Sewol ferry, which carried 475 passengers - 287 of whom are unaccounted for - shortly before it sank beneath the waves.[NEWSIS]

A ferry carrying 475 people, mostly high school students on a four-day school trip to Jeju Island, sank off the southwestern coast, killing at least nine people. The final death toll could be in the hundreds and the worst maritime disaster in Korea in decades.

According to broadcaster YTN, families of at least two missing students received resigned text messages directly after the accident. One message sent by a son to his mother at 9:27 a.m. read: “Mom, I’m sending this because I may not be able to say this again. I love you.”

The 6,825-ton Sewol, in the charge of Captain Lee Joon-seok, hit an object that may have been an underwater rock at 8:40 a.m. yesterday when it was passing through waters three kilometers (1.86 miles) south of Gwanmae Island in Jindo County, South Jeolla, and began listing to the port side.

It took the crew 18 minutes to notify the Coast Guard of the ship’s distress, which specialists said was a crucial period of time. During the 18 minutes, the crew made repeated announcements via speakers, urging passengers to stay calm but not to prepare for evacuation. 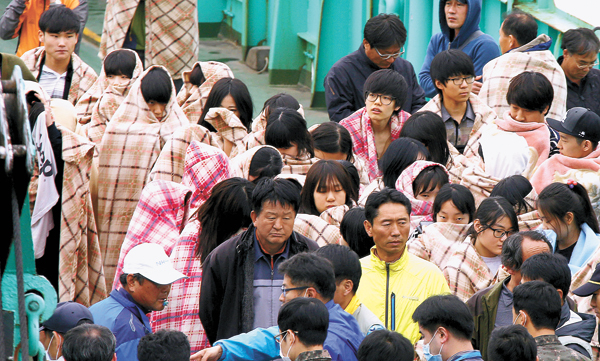 Rescued students from Danwon High School in Ansan arrive at Paengmok Harbor in Jindo County, South Jeolla to be sent to a nearby hospital. By Oh Jong-chan

And the water soon burst in.

“Many of my friends could not don life vests because the sea water burst in too rapidly,” said Lee Da-woon, a junior from Danwon High School in Ansan, Gyeonggi, who was rescued by the Coast Guard.

Among the passengers were 325 students from the school, who were accompanied by 15 teachers. The ferry carried a total of 429 passengers and 30 crew.

Kang Jae-kyung, head of the Gyeonggi Sea Rescue Team, said he suspected that an iron plate on the port side of the ferry was torn by an underwater rock, which allowed water to swamp the vessel.

At around 9:20 a.m., ships and helicopters dispatched by the maritime police arrived at the scene, followed by 40 Navy ships and six helicopters. But just over two hours after the first distress call, the ship sunk completely. As of 7 p.m., only 164 of the passengers were rescued, including just 78 students, said Security and Public Administration Minister Kang Byung-kyu at a press briefing. 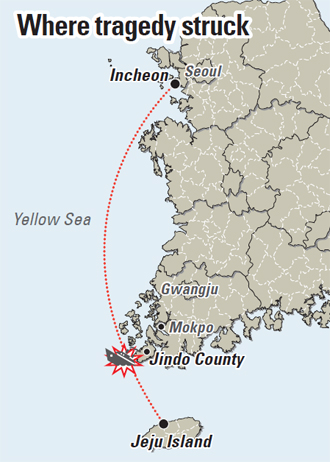 Kang said strong currents hampered efforts to enter the ship and save anyone who was trapped. The passengers who haven’t been accounted for are feared to be stuck inside the sunken ship.

“The scene became chaotic as passengers on the lower floors rushed to the deck with the water coming in and the ship listing,” said Kim Seong-mok, a passenger who was rescued. Passengers down below begged someone to break windows so they could get out.

The ferry departed from Incheon Port at 10 p.m. Tuesday. The ferry sent a distress call at 8:58 a.m. yesterday after it began listing to the side for unknown reasons 20 kilometers off the island of Byeongpung in Jindo County, South Jeolla. That is about 160 kilometers north of Jeju.

Besides the 475 passengers, there were 150 vehicles on board, the Central Disaster and Safety Countermeasures Headquarters said.

The Coast Guard reported that a 27-year-old woman named Park Ji-yeong, who worked for the ferry company, and 11th grader Jung Cha-woong died in the accident. Park was found floating in waters, and Jung died while he was receiving treatment for injuries. A third fatality was a male student, although his identity could not be confirmed. A fourth fatality was also thought to be a student.

Around two hours after the ship sent its distress call, it sank completely, according to the Coast Guard. TV footage showed the vessel slowly sinking into the water with rescue helicopters flying overhead and dropping down a stretcher to rescue a passenger. It also showed a dramatic scene in which Navy and maritime police tried getting into the ship by cracking through windows before it totally sank.

The rescue operations were hampered by strong currents and low visibility at the scene, according to Lee Gyeong-og, a vice minister of the Security Ministry who is in charge of leading the emergency response team.

When asked at a press conference at 4:30 p.m. yesterday whether it was likely that the missing were trapped inside the sunken ship, Lee said, “We are conducting an exploration operation to see whether the missing are floating in or under the waters, or are inside the ship at this moment.”

The ferry Sewol lists to its port side as water filled its lower parts while rescue helicopters fly overhead. Just over two hours after the crew made the first distress call to authorities after realizing the ship was in trouble, the 6,825-ton vessel sank completely. [NEWS1]

The Ministry of Security and Public Administration said a total of 160 divers were dispatched to the scene as well as 18 aerial vehicles for rescue operations. The Navy sent more than a dozen vessels, its special forces and members of an underwater demolition team in a bid to get inside the ship.

Criticism of the management of the Incheon-based Chonghaejin Marine Company also arose after reports that the ferry changed its course to speed up the journey. The company denied the reports and said the ferry was on a regular route.

“There is a possibility that the ship changed its course to opt for an alternate one because its departure from Incheon was delayed [due to bad weather],” said Lee Gyeong-og of the response team.

People on board told the local media there were no strong sea waves or thick fog.

A Coast Guard report that Captain Lee Joon-seok was a substitute for a chief captain who was on vacation also added to suspicions.

Questions about the condition of the ship also arose after it was reported that it had been used by a Japanese company for 18 years before it was purchased by Chonghaejin in 2012.

To offer help in the rescue operation, the U.S. Navy sent the USS Bonhomme Richard to the scene yesterday.

President Park Geun-hye made a rushed visit to the response team set up in the government complex in Sejongno, central Seoul, to be briefed on the unfolding tragedy.

She gave a desperate-sounding request to the rescue authorities: “We don’t have much time left before sunset,” she pleaded. “Please do your best!”

The sinking of the Sewol is expected to be the worst maritime disaster Korea has experienced in more than two decades.

In 1993, 292 passengers died when an overloaded ferry sank off the country’s west coast, which sailed despite warnings of bad weather.