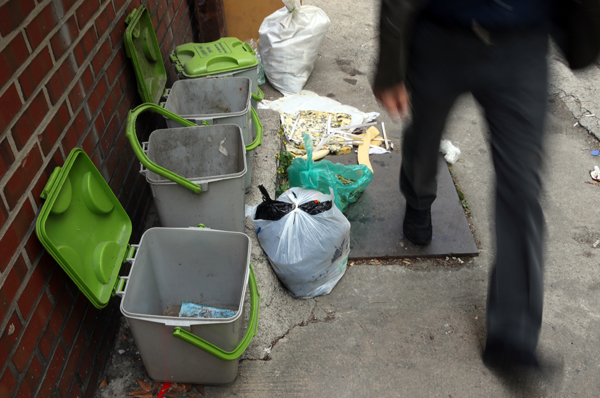 Food waste, which is supposed to be thrown out in regulation garbage bags, is found packed in a normal plastic bag Monday in Myeonmok-dong, Jungnang District, Seoul. Many people have found creative ways to illegally dump their food refuse. By Kim Sang-seon

Last September, Kim Si-Jung, a 56-year-old resident of Myeonmok-dong, Seoul, held a stakeout in front of his house to determine who had been dumping food waste on his front porch.

After three days of sitting and waiting in his car, he finally caught the culprit, which turned out to be his neighbor of 10 years.

“He said he didn’t want to spend money buying regulation garbage bags to dispose of his food waste,” Kim said. “Now we aren’t as close as we used to be.”

The revised “volume rate food waste collection system,” implemented by the Ministry of Environment, went into effect last June. The idea behind it is that people with more waste should be responsible for paying more, and the garbage bags exclusive for that purpose must be purchased specifically from neighborhood stores.

But in an attempt to save 10,000 won ($9.61) to 20,000 won a month, many people have resorted to dumping their leftover food illegally in front of their neighbors’ houses.

In Myeonmok-dong, around Kim’s residence, piles of blue and black garbage bags were filled to the brim near telephone poles or by the walls of houses every 20 to 30 meters (65 to 98 feet).

Even though they weren’t regulation garbage bags for food waste, they were still packed with moldy fruit and discarded fish or chicken bones. The flower garden near the community also stank and was full of trash.

“We made the flower garden to stop people from illegally throwing away [their compost], but it didn’t work out at all,” said Son Tae-yeong, another one of Kim’s neighbor. “We recently asked the borough office to have CCTV cameras installed to prevent those crimes.”

Banners and announcements all over town warn of a 1 million won penalty for illegally throwing away trash, but those threats have been to no avail.

In the 10 months since the disposal system began, the amount of daily food waste in Seoul has gone down from 3,311 tons in 2012, to 3,070 tons in 2013. However, illegal food disposal still remains a problem.

According to the Seoul Metropolitan Government, approximately 14,000 people suspected of illegally dumping their refuse were apprehended last year out of a total of 48,000 cases in Seoul. They fined 150 million won total.

Still, others have found more creative ways of throwing out their refuse, going so far as to stuff it down their toilets or sinks.

Park, a 47-year-old resident in an apartment complex in Sadang-dong, Dongjak District, Seoul, complained to her building’s management last year after a stain appeared on her ceiling, followed by a severe stench.

The odor reportedly resulted from her upstairs neighbor dumping food waste into the sink.

People living in apartments typically follow a different food disposal policy, using collection boxes dedicated for food waste. Even though they don’t need to buy their own regulation garbage bags, each family must pay their part of the total disposal cost, which is equally divided by the number of the households. The drawback, however, is that no matter how much waste one household accumulates, everyone is charged the same.

“Old couples like us don’t generate much food waste,” said a 73-year-old woman surnamed Kim, who lives with her husband in the apartment building. “It’s not fair for us to pay the same commission as other households.”

Others have complained that the prices of regulation garbage bag vary under each local government. A 10-liter (2.6-gallon) trash bag costs 170 won in Gwanak District, for instance, and 800 won in Gangnam District.

“People must be conscious of the fact that their financial gain from dumping waste illegally is not worth the harm imposed on their neighbors.”