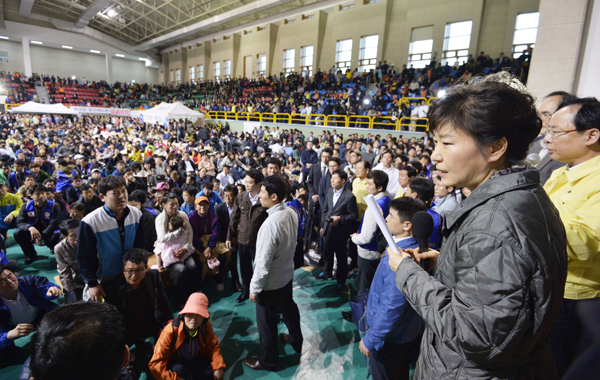 President Park Geun-hye listens to the audience yesterday at an indoor gym in Jindo County, South Jeolla. She visited the gym and the scene of the ferry accident yesterday to console the families of the missing and to comprehend the rescue mission. [NEWSIS]

President Park Geun-hye paid a visit to the gymnasium in Jindo, South Jeolla, yesterday afternoon to urge the hundreds of people there anxiously awaiting news about their family members locked inside the capsized Sewol passenger ferry to keep faith that the government would do its best to carry out rescue efforts.

In front of those families, who have already spent more than a day at the gym, the president vowed to station a high-ranking official with knowledge about the rescue mission at the venue who could frequently provide updates and immediately answer citizens’ concerns.

“I have no idea of what kind of words of condolence I should deliver,” the president said. “I am just back from the rescue scene and saw them doing their best to search by mobilizing every possible resource and manpower. Even though you might be having an extremely wretched time, please do not lose hope. Let’s wait for the news together.”

When one aggravated parent shouted that the police wouldn’t listen to their requests, the president responded, “They shouldn’t be. If what I talked about with you is not carried out, all of these people here with me should take responsibility and step down.”

The parents’ complaints reflect the discrepancy between voices at the scene and how the administrators are coping with the situation.

On the stage facing the audience with President Park were government officials, including Kim Suk-kyoon, head of the Korean Coast Guard, and Lee Ju-young, the minister of oceans and fisheries.

“The president sat up all night, and her visit to the rescue scene was just decided and she is leaving now,” said Blue House spokesman Min Kyung-wook in a briefing yesterday morning.

Immediately after the Sewol ferry was reported to have capsized off the southwestern coast, the government inaccurately and prematurely announced that most of the people aboard had safely been rescued. The vessel was carrying more than 400 passengers, mostly high school students from Ansan, Gyeonggi, who were on a class trip to Jeju Island.

Believing the statement, the president ordered the head of the Korean Coast Guard “not to allow a death toll by mobilizing every human resource, equipment and ship available.”

Only a few hours later, however, the government’s statistics turned out to be horrifically misleading, prompting the president to hastily visit the Central Disaster and Safety Countermeasures Headquarters in central Seoul to urge officials to do their best.

During Park’s address yesterday, which lasted about 20 minutes, she attempted to assuage desperate parents’ fears, but her efforts seemed to be to no avail, and many in the crowd became agitated and started to shout.

“Bring my son back to life!” one yelled.

“Imagine how cold it could be down there!” another cried out.

“I was told a crane to pull up the ship is on its way and is set to arrive [at the scene] around 5 a.m. tomorrow,” the president reassured them. “The crane may not entirely lift the ship, but still, it will probably make it easier for the rescue workers to approach the ferry and speed up the process. I think the families would want to listen to such details.”

Some in the audience clapped their hands hearing those remarks, and Park asked some parents to give her their phone numbers so she could call them later.

On the contrary, two or three infuriated citizens threw water bottles and empty cans at Prime Minister Chung Hong-won, who visited the gymnasium shortly after midnight yesterday to express his regret and intention to thoroughly carry out rescue efforts.

Meanwhile, lawmakers yesterday cancelled or indefinitely suspended scheduled parliamentary activities at the National Assembly and all the events related to the upcoming local elections, with 286 people still unaccounted for, as of press time.