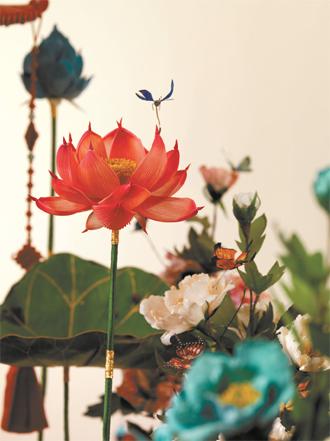 The blooms of vibrant and fresh flowers are at their peak during the spring. However, even in the midst of the season, there are some extraordinary types of flowers that can only be seen at the National Palace Museum of Korea, located next to Gyeongbok Palace in central Seoul. The special exhibition “Beautiful Royal Silk Flower” explores the delicate beauty of royal silk flowers and suggests ways to revive the fading culture of Korea’s noble tradition.

Artisan Hwang Su-ro, No. 124 on Korea’s Intangible Cultural Heritage list, brought back the tradition of chaehwa, or royal silk flowers, that were used to decorate a royal banquet held in 1829 during the time of King Sunjo. The feast was to celebrate Sunjo’s 40th birthday as well as his 30th year on the throne.

However, the exhibition is not only about the traditional beauty of Korea’s royal courts. In one corner of the exhibition hall you can find a section for the ornate works by Paris-based Atelier Boutique Legeron.

Founded in 1880, the family-run atelier began with creating imitation flowers to embellish the hats and outfits of noblewomen. Now it specializes in making flower corsages for haute couture brands such as Chanel, Christian Dior, Ungaro and Jimmy Choo. Unlike Hwang’s handicrafts, Legeron’s flowers are bigger and flashier, and one side of the museum’s wall is adorned with a selection of its works.

In addition, you can explore the atelier’s decades of history through the many manuals, scrapbooks and traditional working tools on display at the exhibition. 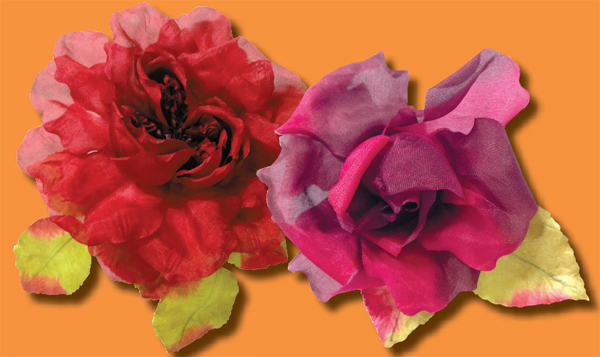 Silk flowers from the 134-year-old house of Legeron are part of the “Beautiful Royal Silk Flower” exhibition at the National Palace Museum of Korea in central Seoul.

“The intention was to see the future,” said Choi Sung-woo, who is the son of Hwang Su-ro and the head director of Ilmac Cultural Foundation, which arranged the exhibition. He thought the traditional culture of chaehwa, which is fading these days, could get a boost if it were more relatable to people’s daily lives, like the flowers crafted by Legeron for people’s outfits.

*The exhibition runs until May 25 and admission is free. Open each day from 9 a.m. to 6 p.m. but closed Mondays. The museum is near Gyeongbokgung Station, line No. 3, exit 5.