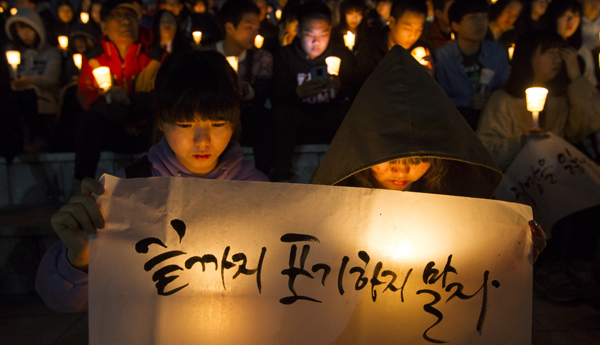 Participants in a candlelit vigil Sunday at a park in Ansan, Gyeonggi, hold a piece of paper that reads, “Don’t give up.” The ceremony, which began with only 200 Danwon High School students, was visited Sunday by more than 1,200 people, including students, parents, alumni and Ansan residents. By Kim Seong-ryong

In the aftermath of the tragic Sewol ferry accident on Wednesday, more Koreans have opted to stay home rather than spend their leisure time out.

The number of visitors to Everland, one of the most popular amusement parks in the country, dropped 33 percent on Sunday compared to the previous week, and that of the Seoul Zoo was also down 24 percent. Some of the sightseeing tours operated by the Korea Railroad Corporation, or Korail, scheduled for later this month and in May, were also canceled after group reservations were revoked.

Medical experts noted that the public is likely showing symptoms of collective lethargy and trauma, and that such a phenomenon may spread further the longer it takes for authorities to deal with the accident.

“I’m worried about people being exposed to the trauma continuously,” said Kim Young-hoon, the chief director of the Korean Neuropsychiatric Association, “because the current situation and media reports are driving people into deep mourning. They seem to be caught up in this distressed atmosphere, not going back to normal.”

The most common symptoms of those conditions, they said, are depression and bouts of crying.

One 39-year-old man living in Seoul said he was supposed to attend the wedding of one of his relatives with his family but ended up going alone. “My wife and child were supposed to go with me,” he said, “but I couldn’t take them with me because my wife was crying all day in front of the TV.”

It appeared that the accident had an even stronger effect on mothers. On an Internet site about parenting, one member published a post that said: “Now I suddenly burst into tears while taking a shower, looking in the mirror or just looking at my baby. I’m crying more than five times a day, and my heart aches hundreds of times a day.

I think I’m [going through a bout of] depression. I don’t know what I can do and I feel guilty about it. I think about the accident all day long.”

A 33-year-old teacher who once worked in Ansan said she was watching the news every day, worrying if she might see someone she knows. “It’s heartbreaking to imagine teachers who tried to save their students, as well as the vice principal [who committed suicide on Friday],” she said. “I know it doesn’t change anything, but I turn on the TV all the time and keep looking at my smartphone. I lost my appetite, so I’m also not eating well.”

“At some schools, [teachers] have their students writing letters of condolences to the victims of the ferry accident,” said Lee So-young, a professor in the department of psychiatry at Soonchunhyang University Hospital. “I understand the purpose of it, but it may cause trouble for students who have lost family members in the past.”

Han Doug-hyun, a professor in the department of psychiatry at Chung-Ang University, added that student were especially sensitive to the emotions of others.

Aside from the public, however, survivors of the accident have also experienced severe post-traumatic stress disorder (PTSD). Out of 175 survivors, 75 are 11th-grade Danwon High School students who were on the way to a field trip on Jeju Island.

Kang Byeong-gi, 41, was among the additional 100. He escaped from the sinking ferry and has suffered mental and physical anguish since. He cited severe headaches after hitting his head on the ship and added that he had not been able to sleep more than 10 minutes because of memories of the accident.

Kang is currently hospitalized near his house, and the 75 rescued students are being treated for PTSD at Korea University Ansan Hospital.

“I still remember clearly the faces of students drawn into a whirlpool screaming ‘help me,’?” said Kang. “I understand students are the priority, but we need care, too. I cannot even get out of the hospital because of nightmares and anxiety symptoms.”

Yesterday, the Ministry of Health and Welfare announced plans regarding psychiatric support for those involved in the ferry accident. In the statement, the ministry promised to assign a doctor for each student survivor and monitor PTSD among Ansan residents for at least three years.

“We admit that the support plan for non-student survivors is insufficient,” an official from the ministry said, “but we will set up psychiatry treatment support for them as soon as we receive the list of survivors from the Korea Coast Guard.”

Since Thursday, other students at Danwon High School have been holding a candlelit vigil each day. The vigil began with only 200 students, but that number has now grown to more than 1,200 after their parents, alumni and students from other schools as well as Ansan residents joined.