For Kim Dal-jin, art history is a present concern

For Kim Dal-jin, art history is a present concern 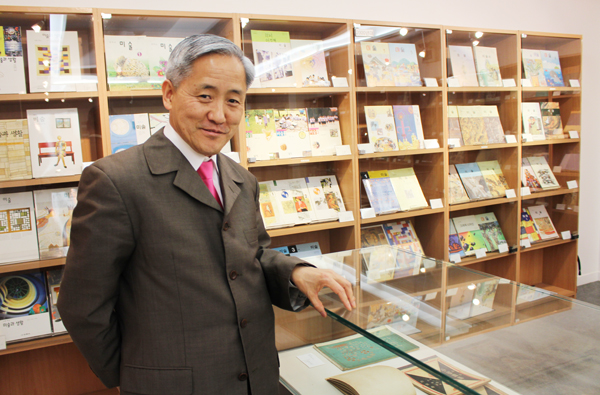 Kim Dal-jin, a pioneering archivist of Korean modern and contemporary art, poses at an exhibition of 20th-century Korean art textbooks at the KimDaljin Museum of Art Archives in Mapo District, western Seoul. By Moon So-young

Along the walls of the small rooms that make up the KimDaljin Museum of Art Archives, art textbooks of 20th-century Korea are on display.

In addition, there are middle-school textbooks published in 1966. Their co-writers were, surprisingly, Kim Whanki (1913-74) and Park Seo-bo, who is now 83 - the two are the most important abstract artists in Korea. These books are closer to today’s textbooks, including art theory and art history.

All told, this exhibition of 210 art textbooks summarizes the history of Korea’s modern art education. The vast number of documents in the museum - including not only textbooks but also 21,000 books, 20,000 art exhibition pamphlets and numerous news clips on about 270 local artists - tell visitors of the modern history of Korean art.

Behind the archives is Kim Dal-jin, 59, director of the museum and the Korea Art Archives, located near Hongik University in western Seoul.

“I began with clipping the photos of artists’ paintings out of magazines when I was a middle-school student,” Kim said. “I decided to make that - archiving art - my job, after I saw an exhibition on Korean modern art. At that time I was a high school senior.”

After graduating high school, Kim worked for some years at a magazine about art exhibitions. Then, in 1981, he came to visit Lee Kyung-sung (1919-2009), a famous art critic and, at the time, the head of the National Museum of Modern and Contemporary Art. Kim asked Lee for a job at the museum, showing the art documents he had collected.

Impressed, Lee employed Kim to store the museum’s data. But, as Kim did not possess a college degree in the arts, Lee had no choice but to give him a lowly, temporary position.

Still, Kim worked hard for 15 years and grew into one of Korea’s rare art archivists. Separate from his work at the museum, he continued to collect art documents, visiting newspapers and galleries regularly.

“With no other place to store them, I put them in boxes in my home,” Kim said. “Soon my home was full of boxes. I had to spread a mattress on the boxes to have a place to sleep.”

“My home was on the second floor of a house I rented,” he continued. “As the ceiling become slightly bent under the weight of the boxes, the house owner demanded I move out. He was really afraid because it was directly after the terrible collapse of Sampoong Department Store [in 1995].”

Without any options, Kim had to move the boxes to his brother’s house. He said that some of them, amounting to 4.5 tons, are still there.

After working as the data manager of Gana Art Center, one of Korea’s major commercial galleries, between 1996 and 2001, Kim finally opened KimDaljin Art Research and Consulting. The research institute has been publishing the monthly magazine Seoul Art Guide since 2002.

Kim also opened KimDaljin Museum of Art Archives in 2008 to show the documents he has accumulated over four decades to the public for free.

Before the turn of the millennium, few cared about archiving art, and fewer even knew much about the concept.

Now, many more people know the importance of Kim’s job. With support from the Arts Council Korea, under the Culture Ministry, Kim is operating a part of his archives under the name Korea Art Archives. Since 2010, the council has financed a large part of the rent for the building where the archive center and the museum are located.

Many organizers of artist retrospectives ask for help from Kim’s archives.

One example was a retrospective of Park Soo-keun (1914-65), held by at the Gana Insa Art Center in central Seoul earlier this year to celebrate his 100th birthday. The exhibition was the largest-ever retrospective of Park, one of Korea’s most beloved modern artists, not only for the number of the oil paintings on display but also because of the amount of archival materials on display. Many of those materials were on loan from the KimDaljin Museum of Art Archives.

Still, Kim is deeply concerned as the contract term with the Arts Council Korea will expire at the end of September. Without the council’s help, he will need to look for a new place to store his vast archives, which weigh a staggering 18 tons.

Kim said he has long searched for public institutions to permanently store and manage the archives, but finding a place is difficult.

“The government focuses on visible things,” Kim said. “Biennales .?.?. yes, biennales are also important. But you know that there are too many of them now in Korea. They are consumptive.

“What is important is infrastructure that can help art be actively produced.”

*The exhibition runs until April 30. Admission is free. The museum is closed on Sunday. For details, call (02) 730-6216 or visit www.daljinmuseum.com.