A step back in time

A step back in time 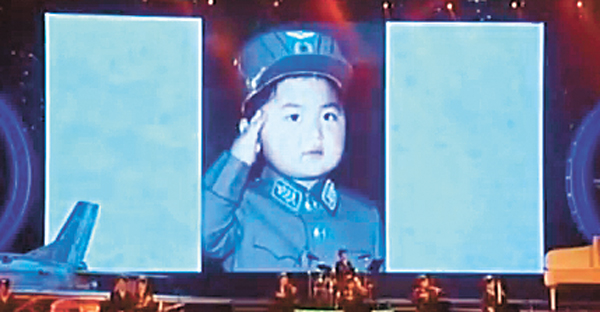 North Korea’s state-run Korean Central Television releases a photo of Kim Jong-un when he was a child. The picture was projected on a screen on stage during a Moranbong Band performance, held on an unidentified date. In the photo, released on Sunday, the little Kim salutes while wearing the uniform of North Korea’s air force. KCTV also released other shots of Kim, including one of him sitting in the cockpit of an airplane, supposedly when he was a teenager. It is the first time the regime’s state media has released photos of the leader. The Rodong Sinmun, the ruling party’s mouthpiece, also released photos yesterday of Kim encouraging a combat jet pilot, also the company commander of the Air Force’s 188th Corps. Seoul officials believe the photos are part of state propaganda glamorizing Kim ahead of its suspected preparations for a fourth nuclear test. Screen capture from KCTV