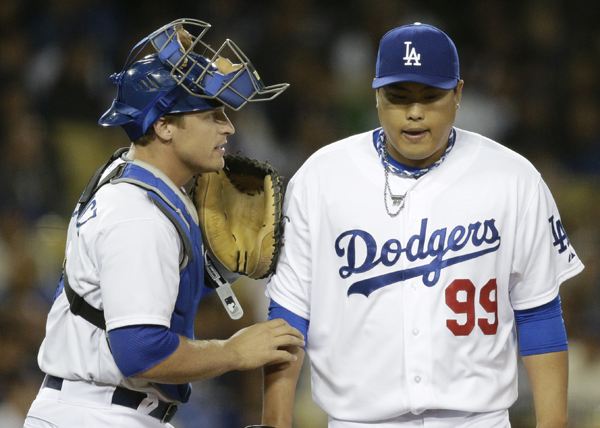 Dodgers catcher Tim Federowicz talks to Ryu Hyun-jin during the fifth inning of Tuesday’s game against the Philadelphia Phillies in Los Angeles. Ryu worked six innings and got no decision. [AP/NEWSIS]

Ryu Hyun-jin of the Los Angeles Dodgers failed to pick up his first home win of the season due to lack of run support from his teammates.

On Tuesday local time, against the Philadelphia Phillies at Dodger Stadium, Ryu made his third quality start in a row as he allowed two runs in six innings on nine and two walks while striking out three, but the Dodgers were able to muster only two runs off Phillies starter A.J. Burnett.

Dominic Brown doubled home Carlos Ruiz after an error by left fielder Carl Crawford with one out in the 10th inning as the Phillies went on to win, 3-2.

J.P. Howell started the inning by retiring Ryan Howard on a ground ball, but the Phillies catcher followed with a towering fly to the left that bounced off Crawford’s glove as he collided with shortstop Hanley Ramirez for a two-base error. Brown then doubled into the left-center field.

Before the national anthem at the start of the game, the Dodgers used the big screen in center field to show images from the autograph event Ryu organized on Monday to raise funds for survivors and families of victims of the Sewol ferry disaster. Then Ryu removed his cap and bowed his head along with players from both teams and fans in a moment of silence.

Ryu retired the first three hitters with only nine pitches.

From the second inning, however, he had to work out of jams caused by shaky infield defense.

With a runner on first and one out, Ryu got an easy ground ball to short that should have been a double play to end the inning. But Ramirez couldn’t make the play. After retiring Jayson Nix, Ryu struck out Freddy Galvis to end the threat.

In the top of the third, Ryu allowed a leadoff single by Burnett and another single to Ben Revere. The ground ball hit by Revere seemed catchable, but it got by second baseman Dee Gordon. Ryu, however, struck out Jimmy Rollins and got Marlon Byrd to hit into a 6-4-3 double play.

In the top of the fifth, Ryu again gave up singles to Burnett leading off and Revere. Byrd then drove in Burnett on a single to left field, giving the Phillies a 1-0 lead. Howard hit a sacrifice fly to left field, bringing Revere home.

“I had a hard time controlling my breaking balls,” Ryu said after the game. “Allowing three hits to Burnett impacted the game badly.”

Ryu gave up two more hits but didn’t yield a run in the sixth, his last inning of work.

“Ramirez’s fielding must be a headache not only for Ryu but also for manager Don Mattingly,” said analyst Kim In-sik who was Ryu’s manager with the Hanwha Eagles. “I think he [Ryu] hasn’t recovered his stamina after throwing 112 pitches against the San Francisco Giants last week.”

Adding to Kim, most of Ryu’s fastballs ranged between 89 miles per hour and 91 miles per hour and his breaking balls, especially sliders, which held the Giants in check, didn’t break sharply and were frequently out of the strike zone. Ryu’s troubles at home continued, bringing the number of hits he has allowed to 17 in eight innings over two games at Chavez Ravine. His ERA went from 1.93 to 2.12.