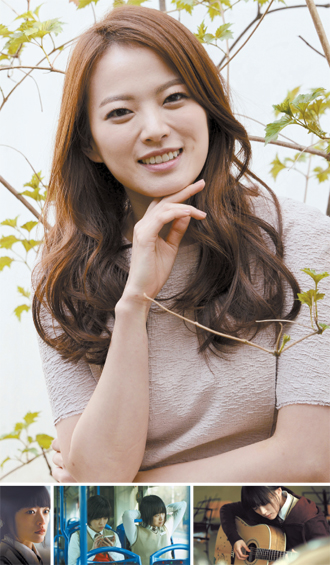 Top: Chun Woo-hee, 27, stars in the recently released film “Han Gong-ju,” directed by Lee Su-jin. Although Chun has appeared in many films since 2004, audiences have just begun to notice the actress. Above are scenes from “Han Gong-ju.” [NEWSIS]

The recently released film “Han Gong-ju” tells the story of a female high school student named Gong-ju. She is trying hard to forget a terrible memory from her past, but society is cruel and unforgiving, and the girl is forced to continue her suffering.

The film itself is unique, but what makes it more remarkable is actress Chun Woo-hee, 27, who plays the titular role. The small film, which opened on April 17, spent its first week climbing the box office rankings, going from sixth to fourth as of Tuesday, according to the Korean Film Council.

With the film, it may seem like Chun has emerged out of nowhere to become a leading actress, but in fact she has been acting steadily for years, including in the hit “Sunny” (2011) and, more recently, in “Elegant Lies” (2013).

Often in movies, a female high school student is depicted as a delicate innocent, the kind of girl that audiences want to embrace. But Han Gong-ju, as played by Chun, goes further. She gets physically and mentally violated by her male classmates and loses her best friend. Her family is in such dire straits that she cannot live with her parents, so is sent off to live with others.

She lives day by day as if she doesn’t exist, trying not to create any ripples or irritate the family she’s living with. Whenever she has to move, she desperately tries to erase all traces of herself, but at the same time she wishes that someone might connect with her, to prove that her life has meaning. Gong-ju is so pale that she looks like she could collapse at the slightest touch.

Chun says the character felt like “my role” from the start.

“I read the script and I felt that I could do this,” said Chun. “I had a strong feeling that I could play the role well. What worried me was whether I’d be too absorbed into the character and not be able to get out of it.”

Acting that is technically excellent can really stand out, sometimes to the detriment of a film - like how a singer who sings “technically well” can overwhelm a song with a flurry of high, difficult notes. But Chun says that’s not the way she wants to act.

“If you act to make a display, it can make the audience uncomfortable,” she said. “You know, there are actors who seem to act so well, but you don’t really become fond of them. With the character Gong-ju, I felt I should not play the role in such a way.”

On the big screen, Chun, while playing Gong-ju, gazes blankly at the camera. Despite her expression, emotions sway in her eyes. That’s the type of character that Chun has interpreted in her own way. It’s not technically perfect, but an entirely different kind of acting.

When the film portrays the terrible incident at the heart of Gong-ju’s story, the director carefully follows Gong-ju’s trembling voice, expressions and emotions. It’s a process that reveals not only Gong-ju’s suffering but also her will to live. She’s been terribly hurt, but at her core is a fierce determination. Chun describes Gong-ju as “a very strong girl.”

“Instinctively, Gong-ju has a strong will to live,” said Chun. “She bravely stands up and wants to start again. That was really impressive for me.”

“Han Gong-ju” is a movie that’s full of thoughtfulness, but at the same time it is very brutal. Gong-ju is a character who feels everything is beyond her capacity. She looks like she’s going to collapse at any time and, even though she is the victim of a crime, she suffers from a sense of guilt. Gong-ju had a friend named Hwa-ok who died, and from then on the ghost of Hwa-ok follows Gong-ju around everywhere, like a shadow. Watching it is tough for the audience. Chun also says that’s the part when she felt overwhelmed.

“In every scene that related to Hwa-ok, I had trouble acting,” said Chun. “That’s because I was torn apart. There’s a scene where Gong-ju talks about Hwa-ok out loud for the first time. She talks about her in a casual manner, but when I imagined what it would’ve been like for her to bring that up, my heart aches,” said Chun tearfully. “This film leaves behind so many afterimages.”

Despite high praise for her acting from audiences, Chun says director Lee Su-jin never complimented her.

“Director Lee, I believe, is not a person who talks out loud about his emotions,” said Chun. “When he says ‘Hmm, that’s good,’ that’s his highest praise.

“Often he made me reshoot a scene saying ‘again,’ but he never explained why. That somewhat made me reserve some energy when acting a scene because I knew he would keep on saying ‘again.’ So I asked him to tell me the reason why we were redoing the scene, because I wanted to give it my all when I was acting. When I told him that, he said ‘Hmm, all right.’ But, of course, when we started to shoot again, he just said ‘again’ once more,” said Chun, chuckling. “So I gave up.”

Chun thinks the reason why Lee decided to cast her is because of the song she sang in the audition.

“He asked me to sing any song I wanted,” said Chun. “So I sang Lee Sun-hee’s ‘Fate.’ I can’t remember how I sang it, but he began to record my singing. I heard later on that whenever he met acquaintances, he played the recording and said, ‘It’s good, isn’t it?’?”

Chun has appeared in numerous films before, but she didn’t leave much of an impression with audiences. People often said they had seen her face but could not recall where. Certainly, she has taken roles in some high-profile films, appearing in supporting roles in Bong Joon-ho’s “Mother” (2009) Kang Hyung-chul’s “Sunny” (2011).

More recently, she had a supporting role in “Elegant Lies,” which was released in March. Directed by Lee Han, Chun played Mi-ran, a friend of the lead character, who was played by Ko Ah-seong.

“If I say I acted in ‘Sunny,’ people get surprised and ask me who I played,” said Chun. “When I tell them about playing the bully, they slap their lap and say ‘Ah!’ Even for me, when I look at movies that I appeared in, I have different faces. When I played Sang-mi, who is full of jealousy, she has this rock face. When I played Mi-ran [in ‘Elegant Lies’], she showed a different face.”

Most actresses may find it distressing to be forgotten, but Chun seems mostly amused by it. “It’s fun seeing people having a hard time trying to remember where they saw me,” she said.

“Isn’t it better? Because this way audiences won’t be bored with my face, even if I have a long career. Moreover, it’s good that I can walk around anywhere and not be recognized.”

For Chun’s acting, nothing seems awkward. The way she walks, the way she moves her hands, the way she opens her mouth to speak, they fit her character naturally. All actors memorize their lines, but having that extra something is what makes one really special. According to Chun, “it’s the result of fully mobilizing both the head and the body.

“Even before I made a debut, many people asked me where I got the confidence to try this as a career,” she said. “I wasn’t as pretty as other actresses and didn’t have a great body. Plus I am relatively short. So my thinking was simple: I said to myself that I would show people what the essence of acting is.”

Of course Chun wants to be good at acting, but for her the best part of her career is the sense of freedom acting gives her.

“I haven’t had much experience in life,” said Chun. “I used to be very passive, so I tend to think more than I act. So I always had a thirst for freedom. Thankfully, I grew up with loving parents, but they always treated me like a child. I wanted to free myself from the ‘good daughter’ image and find my identity. I don’t want to sound grandiose about acting, but it certainly acts as a medium for me and this world. When I am acting, I really feel free.

“I was eager to cut loose when I got to college,” she continued. “But after a month, I was bored. It wasn’t much fun.”

Although Chun describes herself as a “passive person,” she seems to have more boldness than she realizes. Many actresses are anxious to get opportunities to audition for roles in movies, but Chun says she has turned several down.

“Some people asked me whether I have connections in the industry since I’ve turned down several auditions,” said Chun. “But I only want to play roles I feel something for. For roles I couldn’t feel anything, I turned them down, even though the opportunities came.”

Chun even kept director Bong Joon-ho dangling for ages. When Chun was auditioning for his movie “Mother,” she said she didn’t really feel anxious about getting the role.

“Some would think because it’s a director Bong movie, you have to get the role no matter what. But I didn’t really think that way. I felt, ‘if he picks me, that’s good news, but if he decides to pass on me, he must have a reason.’ I heard later on that when he saw me in the audition room, he wondered if I was interested in auditioning at all.”

Since then, directors seem to have noticed the charms of Chun.

“After the shooting wraps, the directors that I’ve worked with have all told me that they want to work with me again,” said Chun. “I hope that was not just empty talk.”

Although Chun seems optimistic about everything, she says her feelings get hurt, too.

“I get really hurt when people say that I was ‘used’ and that I was only cast for ‘functional purposes,’?” said Chun. “But I decided to think differently. If I was able to ‘function properly’ and fulfil the directors’ needs in a film, I’m satisfied with that.”

Chun, however, hopes this film to be referred to as her “representative work.”