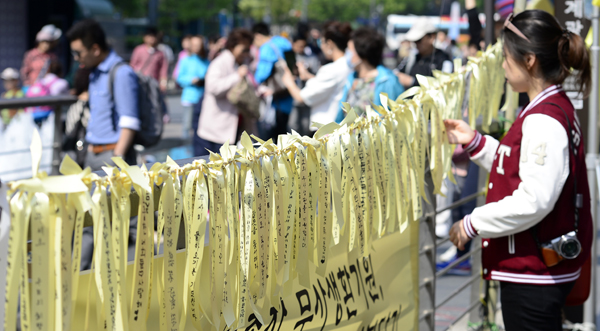 Dozens of yellow ribbons that symbolize hope for more survivors are tied to a rope yesterday at the Cheonggye Stream, central Seoul. [NEWS1]

A week has passed since the doomed Sewol ferry suddenly capsized, leaving hundreds dead and missing, but many have still not given up on the idea that there could, by some miracle, be survivors still within the 6,825-ton ship.

Yellow ribbons have become a symbol of this optimism, and they’ve gone viral both on and offline.

The campaign is believed to have originated during World War II, when women would attach yellow ribbons to trees in the hopes that their husband would return home safe.

The recent movement here is believed to have been initiated by Active, Autonomous, Alter Life Together (ALT), a university club whose members handed out hundreds of yellow ribbons on Saturday in Sinchon, northwestern Seoul.

“The meaning of yellow ribbon is: ‘I wish for your safe return,’?” a member of the ALT said in an article Monday on the club’s website.

They also included a picture of a ribbon on a yellow background with a message at the bottom that read, “A small movement for a big miracle.”

The photo soon spread online, and many people posted on social media, with some changing their profile photos to images of yellow ribbons.

But the ALT’s yellow ribbons have spread across the country offline as well, with people hanging them at schools, in parks and in other public areas like Cheonggye Stream, in central Seoul.

“I really appreciate people praying for the missing passengers and their families and sharing their grief,” Lee Min-joo, a member of the ALT, told the Korea JoongAng Daily.

Others praying for survivors left written messages at Danwon High School, whose 325 11th-grade students were aboard the doomed ferry, and at the temporary altar set up at the Ansan Olympic Memorial Hall. A tent for scuba divers at Paengmok Harbor in Jindo, South Jeolla, was also covered with messages for the victims.

“Your birth was a miracle, so please make it out miraculously,” read one message.

Another message read, “Please come back. I don’t want to hear ‘I miss you,’ so tell your parents ‘I’m home.’ Please let your mother wash your school uniform tomorrow.”

Some also sent letters to the indoor gymnasium in Jindo, where parents and families of the passengers have been waiting for news.

“Friends, you guys have lots of things you have to do and want to do. They say the [homework] assignment for Danwon High School is to ‘come back to school soon.’ You need to do it. I will pray and pray again, until God answers. Please come back and look at the beautiful sky together,” a message delivered to the gym said.

At the gym in Jindo, volunteers from all parts of the country are aiding the relatives of passengers still missing. According to the South Jeolla Volunteer System, about 1,900 people from 80 volunteer organizations have visited the gym so far.

“I came to Jindo because my brother is a middle school student,” said Jeong Da-wun, a 24-year-old volunteer. “It just felt like my family member could have been among those in the accident. I hope the public will not quickly forget the pain of the victims’ families.”

As the death toll rises, many volunteers have become affected by the growing sense of sorrow among the families staying in the gym.

“My children and nephews are the same age as the students,” said Kim Gi-won, a 64-year-old volunteer who has stayed at the gym since April 17. “It won’t take more than 30 seconds to make even the strongest man cry here.”

A number of volunteers have even visited the doctors available there for psychological counseling services.

“I was shocked by people crying out in sorrow or shouting at the volunteers and government workers,” a 23-year-old volunteer said after speaking with a doctor.

A doctor added that about half of people who were treated were volunteers.

Meanwhile, universities are canceling or postponing festivals scheduled this spring. Seoul National University was first, canceling its spring festival. It also set up a board for messages for the victims of the ferry accident. More than a dozen universities in Seoul also called off festivals.