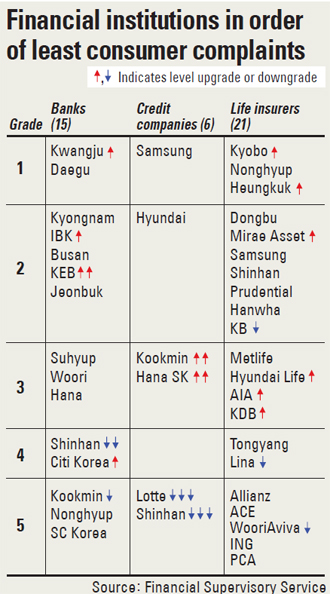 The credibility of major financial institutions was hit hard by the recent series of data leaks and fraud in online transactions, according to a survey released yesterday by the Financial Supervisory Service.

The survey showed credit card companies were hurt the most because they had the worst personal information leaks, which took place for a year before they were revealed in January.

Banks suffered from consumer complaints due to growing fraud in electronic financial transactions and cases of pharming and phishing.

The financial watchdog has conducted the survey of large institutions annually since 2006. Last year, it looked at 85 entities. In the survey, the FSS classifies institutions into five grades by number of consumer complaints, with five being the lowest.

KB Financial Group was hit hard by the latest information leaks, while KB Kookmin Bank’s grade fell from four to five due to a 14.5 percent increase in consumer complaints.

KB Kookmin Card also slipped a notch to grade three. The card company had the largest number of customers who were victims. Out of 104 million exposed card and bank accounts, 50 million belonged to KB.

Shinhan Financial Group was in a similar situation.

Lotte Card got about 41 percent more complaints last year due to the data spill. The company’s grade five rating was unchanged.

Among the 15 banks surveyed, Kwangju Bank and Daegu Bank, which operate mostly in provincial areas, had the lowest level of consumer complaints.

Samsung Card maintained its position in the top group, too.

Tongyang Securities suffered the largest number of complaints across the financial industry due to its fraudulent sales of corporate bonds and papers.

The number of complaints at the company surged from 181 to 1,691 last year.

The FSS will upload the survey on the consumer page of its home page.