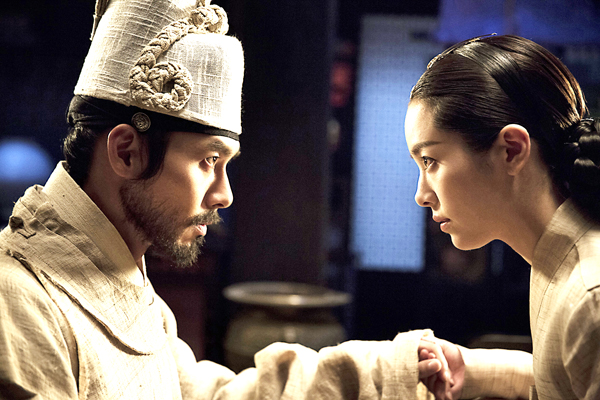 Back on the big screen as a ripped king of Joseon, Hyun Bin may have been a little bit too ambitious with “The Fatal Encounter.”

Playing the 22nd Joseon monarch Jeongjo (1752-1800), Hyun tries to hone in on action, drama and history in an intricate plot that depicts the 24 hours leading up to an attempted assassination.

Taking on a character who faced multiple death threats during his reign, the film makes it no secret that Hyun got in shape - not that he was ever out of it - for the film.

The film opens with Hyun showing us just how buff he is, just in case you forgot the trailers and posters with the new physique that’s been dubbed “angry back muscles.”

But underneath the washboard abs there isn’t much to keep the viewers interested. Although Hyun does exude regal charm in his royal garb, as the story progresses the flame in Hyun’s Jeongjo diminishes, and it becomes all too easy to take your eyes off the king. Even when he’s showing off his archery skills, or when he’s perched on a white horse and the sun shines from behind, it’s yawn inducing.

Perhaps Hyun should have spent less time sculpting his back and more time researching or watching period films and dramas. Hyun’s speech is flat, as are his emotions. His temperament is too calm for someone whose life hangs in the balance, while his relations with those who are supposed to be dearest to him are unmoving.

But to be fair it’s not just the brawny Hyun who fails to deliver in this 10 billion won ($9.6 million) film.

Han Ji-min as the cunning Queen consort Jeongsun, although stunning, also loses her spark as the minutes drag by.

The first exchange between the step-grandmother and grandson sets the stage for what is to come: there will be conflict, or so they inform us with fancy words, but nothing about their movements or succeeding exchanges explores this power struggle, except again through a lot of slandering.

In her sultry rendition of a widowed queen just a few years older than Jeongjo, Han seems completely out of her element. She admitted that she chose the role because it was so different from any other role she’d taken on before.

At best she’s a pretty distraction, at worst a damper just when the pace picks up - a rare achievement for a character so central to the plot.

It’s also curious why the director, Lee Jae-kyoo, chose to leave out Jeongsun’s colorful past - marrying King Yeongjo at the age of 15 when he was 51 - when some minor characters’ lives are put under the microscope.

It’s a good thing that the film boasts an impressive lineup of supporting roles because that’s where the heart of the story seems to be.

One of the three gems that make up for the humdrum of Jeongjo and Jeongsun is an assassion (played by Jo Jung-suk) sent from outside the palace.

There is also the faithful eunuch servant to Jeongjo, who is probably the most empathetic character. Jung Jae-young who plays the good servant is the film’s most endearing and interesting character, especially toward the end as his role in bridging the life outside and inside the gilded walls of the palace is made evident.

Another minor character who will blow you away is Gwang-baek (Cho Jae-hyun), a gang leader who kidnaps orphans and makes ruthless killers out of them. He exudes pure evil and steals every scene with his brand of quirky brutality.

For every minute the camera zooms in on boring Jeongjo reading, doing push-ups and brooding, you are wondering what Gwang-baek is scheming.

Director Lee is best known for his TV dramas (like “Beethoven Virus” and “King to Hearts”) and his film stands as proof, especially in areas of character portrayal. The leads are such generic good guys and bad guys that’s it’s hard to relate to either side.

There are some picturesque scenes, though, and the action, when it finally does unfold, is worthwhile.

“Fatal Encounter” may have been better marketed as a story about bandits, with Jeongjo as a minor character. With each scene it becomes clear that Hyun is playing second fiddle to supporting characters who soon eclipse him. It opens April 30.