29 years of controversy over visits to Yasukuni

29 years of controversy over visits to Yasukuni 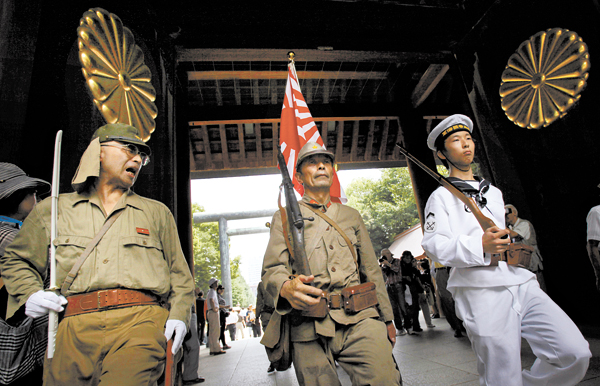 On Aug. 15, 2010, visitors wearing Japanese Imperial Army and navy uniforms enter the Yasukuni Shrine in Tokyo, which honors Japan’s war dead, during a ceremony marking the 65th anniversary of the end of World War II. [AP/NEWSIS]

Two members of the Shinzo Abe cabinet visited Yasukuni, which enshrines Class-A war criminals and is a symbol of Japan’s militarism. One of them included Yoshitaka Shindo, the minister of internal affairs and communications.

This was Shindo’s second visit in two weeks. Keiji Furuya, the chairman of Japan’s National Public Safety Commission, paid homage at the shrine on Sunday, before the annual spring festival that ran from Monday to Wednesday.

While Prime Minister Abe skipped a visit this spring, as anticipated with U.S. President Barack Obama set to visit Tokyo last week, he made a ritual offering of a masakaki tree on April 21, as he did for the spring and autumn festivals at the shrine last year.

The Korean Ministry of Foreign Affairs said that such offerings are “glorifications of Japan’s past invasion, colonization as well as war aggressions.” It added that “such continued ahistorical behavior, made amid the international community’s strong denouncing of Prime Minister Abe’s visit to the Yasukuni Shrine late last year, only shows that Japan’s so-called active pacifism is only a fabrication.”

To Koreans, the shrine is seen as a symbol of Japan’s colonialism, especially as more than 21,000 Korean souls were involuntarily enshrined in Yasukuni along with Japanese soldiers and war criminals. They have Japanese names.

Chief Cabinet Secretary Yoshihide Suga, the top government spokesman, told reporters Monday that Abe made his offering “as a private individual,” and therefore it was not the government’s place to comment.

Abe claims it is “natural for a state leader to pray for the souls of those who fought for the country.”

But the ritual offering can only be seen as a blatant contradiction of his declaration last month that he will stand behind the 1995 Murayama Statement.

Abe’s visit to the shrine on Dec. 26 provoked anger from Seoul and Beijing.

The U.S. Embassy in Tokyo, which rarely criticizes Abe, said in a statement the same day, “The United States is disappointed that Japan’s leadership has taken an action that will exacerbate tensions with Japan’s neighbors.”

Analysts say Abe has to please his extreme right-wing supporters by paying respects at Yasukuni while also having to worry about the reactions of neighbors and the international community at large.

China’s Ministry of Foreign Affairs called Abe’s visit “an attempt to whitewash the history of aggression and colonialism by militarist Japan.”

There was speculation whether Obama’s three-day state visit last week would affect lawmakers’ visits this spring.

A year ago, a record of 168 lawmakers visited the shrine along with three cabinet members. In comparison, 81 lawmakers attended the spring festival in 2012 and 54 the year before.

“The number of lawmakers that visited the Yasukuni Shrine this time around, though lower than last year, is not significantly lower,” pointed out Nam Sang-gu, a researcher at the Northeast Asian History Foundation. “And two cabinet members visited this time around compared to three last spring.

“It appears the lawmakers - amid speculation on whether they would worry about President Obama’s visit - showed they did not worry after all.” 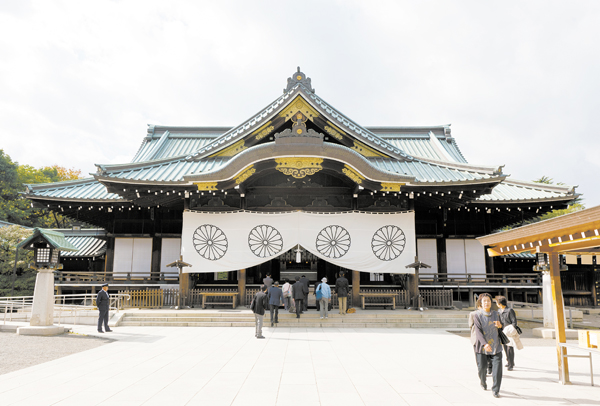 The Yasukuni Shrine was established in Kudan, Tokyo, in 1869 during the Meiji era and currently enshrines nearly 2.5 million war dead. These include famous historical figures such as Ryoma Sakamoto of the Meiji Restoration. It also enshrines soldiers who died in wars such as the Boshin War, the Sino-Japanese War, the Russo-Japanese War, World War I and the Manchurian Incident.

But more than 2.1 million of the war dead at the shrine, or more than 86 percent, are those who were killed during World War II and the Pacific War, including 14 Class-A war criminals from World War II.

It wasn’t until after the Class-A World War II criminals were enshrined there in the late 1970s that the visits of the prime minister to the shrine became an international issue.

In 1948, 28 Japanese war criminals were brought before the International Military Tribunal for the Far East in Tokyo, and 25 defendants were found guilty of war crimes.

Then, 14 of the war criminals convicted at the Tokyo War Crimes Trial were surreptitiously enshrined at Yasukuni on October 17, 1978.

The convicted war criminals include Hideki Tojo, who served as prime minister, war minister and home affairs minister of Japan from 1941 to 1944. He is best known as the person who authorized the attack on Pearl Harbor in 1941 when he was the prime minister. He was convicted by the International Military Tribunal of crimes against humanity and hanged in Tokyo on December 23, 1948.

Other figures include the governor-general of Korea, Kuniaki Koiso, responsible for making and enforcing suppressive colonial policies for Koreans under Japanese rule and also forcibly mobilizing Koreans into the military or for manual labor, and Seishiro Itagaki commander of the Chosen Army. Koiso died in prison, and Itagaki was hanged. Both are enshrined at Yasukuni.

Of the 14 war criminals enshrined at Yasukuni, seven were sentenced to death by hanging, three to life imprisonment and one to 20 years of imprisonment. Two died of disease during the trial process.

The issue of a Japanese prime minister visiting the shrine first began receiving international condemnation when Prime Minister Yasuhiro Nakasone paid respects at the Yasukuni Shrine on Aug. 15, 1985, the first to do so “in an official capacity,” even offering flowers paid for with state funds.

The Chinese and Korean foreign ministries criticized it as an attempt to legitimize Japan’s past militarism.

Nakasone didn’t make a repeat visit in 1986, heeding the criticism both domestically and internationally and saying that the enshrining of Class-A war criminals would “provoke national sentiments in the invaded countries.”

Conservative Japanese lawmakers often make pilgrimages to the shrine during the April 21-23 annual spring festival, the Oct. 17-20 annual autumn festival, or on Aug. 15, the anniversary of the end of World War II.

A Japanese emperor has not visited the Shrine since 1978.

Before Abe, the last serving Japanese prime minister to visit Yasukuni was Junichiro Koizumi in 2006. Koizumi visited the shrine each year since 2001, a total of six times while he was the prime minister. Before that, Prime Minister Ryutaro Hashimoto visited on July 29, 1999.

Abe did not visit the shrine during his first term as prime minister from 2006 to 2007.

His maternal grandfather, Nobusuke Kishi, was initially charged as a war criminal but was subsequently cleared of the charges by a Tokyo tribunal. He went on to become the prime minister from 1957 to 1958.

There is speculation over whether Abe will repeat another visit.

“He avoided the key dates such as the spring and autumn festivals or the Aug. 15 war anniversary and instead went on Dec. 26 instead,” said Nam. “But he may decide to go ‘properly’ before his term expires.”

Official Japanese records indicate that 21,181 Koreans are enshrined at Yasukuni. A total of 27,696 Taiwanese are also enshrined. Many of these Koreans were forcibly mobilized by the Japanese during Japan’s colonial rule of the Korean Peninsula.

“This is a historical issue, but it also is a human rights issue as the rights of some 21,000 Koreans buried there are being ignored,” Nam said. “These Korean people’s names are recorded with Japanese names, but since they are dead, they cannot protest it. What is liberation for these people, with a Japanese name, enshrined in a Japanese facility?”

For these Koreans enshrined at Yasukuni alongside the Class-A war criminals and others who may have caused their untimely death, their souls have yet to be liberated from colonial rule.

Some of their family members only found out that their relatives were enshrined against their will or without their knowledge decades later.

On Oct. 22, some 27 descendants of these people filed a lawsuit in the Tokyo District Court in which they called on the Japanese government and the Yasukuni Shrine to remove their family members’ names from the shrine.

There was a similar lawsuit filed by Korean families against the Japanese government in the Tokyo District Court in June 2001 and February 2007, demanding the withdrawal of their family members from the shrine.

“The souls of the victims, who were forcibly mobilized and killed during Japanese colonial rule, were enshrined as deities for the war of aggression-against the religions of the victims themselves and the will of the bereaved families-and have been violated for over half a century,” they said. Both cases were dismissed by the court.

The Yasukuni Shrine claims these Koreans were Japanese at the time of their deaths, hence they are considered Japanese soldiers.

Last October, Korea’s Foreign Ministry spokesman blasted a Tokyo High Court that upheld a lower court’s ruling in July 2011 denying an appeal by a group of Koreans calling for the removal of their family members’ names from the Yasukuni Shrine.

The court said the plaintiffs need to show tolerance to freedom of religion.

Spokesman Cho Tai-young called the ruling “deeply regrettable” and “contrary to humanity and history” and an “enormous encroachment on the honor and dignity of [the dead Koreans] and their families because the shrine glorifies Japan’s imperialistic aggression.”

Last week, a group of 273 relatives of fallen Japanese soldiers and religious groups filed a lawsuit with the Tokyo District Court suing Abe for his visit to the shrine last December.

The plaintiffs said the pilgrimage aggravated relations with neighboring nations and resulted in emotional distress. In their complaint, they said Abe had violated the Constitution, which stipulates a separation of politics and religion. They requested the court issue an injunction against any future visits to the shrine by the prime minister.

Another lawsuit on Abe’s visit was filed with the Osaka District Court on April 11. The plaintiffs demanded a token amount of compensation - 10,000 yen, or less than $100.

These are not the first lawsuits protesting a prime minister’s visit to the shrine.

In 2001, a group of Japanese and Koreans filed lawsuits claiming Koizumi’s visits to shrine as unconstitutional with various district courts, including a Fukuoka court.

The Fukuoka District Court in 2004 and the Osaka High Court in 2005 likewise ruled that a visit to the Yasukuni Shrine in 2001 by then-Prime Minister Junichiro Koizumi was unconstitutional because it could be considered a religious activity.

The Supreme Court in 2006, however, dismissed the plaintiffs’ demands.

Rising militarism and the denial of invasion

Abe is trying to revise the pacifist Japanese Constitution to allow for collective self-defense so that its military could come to the defense of allies even if the country itself wasn’t attacked. The notion is supported by the United States but is opposed by neighbors who have not forgotten the pain of Japan’s invasion and colonization.

Abe said he plans to restore Japan’s rights to collective self-defense by 2020.

Abe has been criticized by Korea for his revisionist behavior in regards to historical issues.

“It is necessary [for Japan] to improve relations with Korea,” said retired Lt. Gen. Noboru Yamaguchi, professor of military history and strategy at the National Defense Academy of Japan, “because Korea is key in Japanese security and defense.” He emphasized the importance of military information exchange between the United States, Japan and Korea.

“Even within the nationalistic right-wingers in Japan, there is opposition to historical regression,” the former commanding general of the Japan Ground Self-Defense Force Ground Research and Development Command said at a forum in Seoul last week.

But he called the issue of historical revisionism “a domestic one, not an international one.” He also denied that Japan wants to gain rights to collective self-defense in order for Japan be become a military power.

“What is important is that the Abe government needs to make more efforts to improve relations,” he added.