Having experienced loss, Olympian weighs in on Sewol tragedy

Having experienced loss, Olympian weighs in on Sewol tragedy 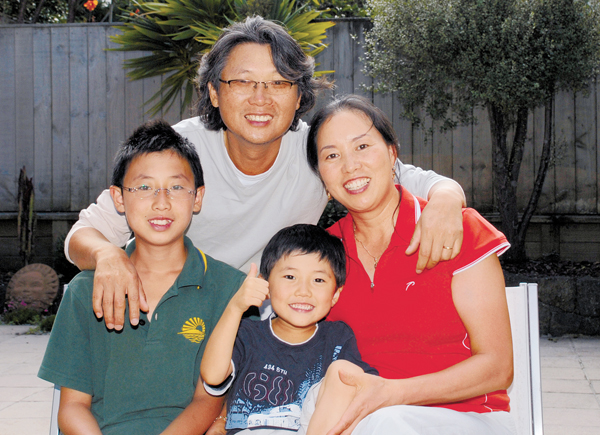 Kim Sun-deok, a former Olympian and national field hockey player, and her family settled in New Zealand in 1999 after her eldest son died in a fire at the Sealand Youth Training Center. Her third son, Si-hyun, middle, was born in 2002, three years after the family emigrated. According to Kim, he looks a lot like her late son Do-hyun. On the left is Kim’s second son, Tae-hyun. By Kim Sun-deok

Shortly after the death of her young son, Kim Sun-deok decided it was time to leave Korea behind.

Do-hyun was just 6 years old on June 30, 1999, when a fire broke out in the early morning at a dormitory at Sealand Youth Training Center, an educational summer camp near Hwaseong, Gyeonggi.

He was among 19 elementary school-aged children and four adults who perished in the blaze that day. Most of the teachers responsible for supervising the campers escaped from the dormitory, abandoning the young ones in their charge.

An investigation later revealed that there had been irregularities and corruption associated with the building’s license and management. The dormitory’s poor construction and lax safety conditions also contributed to the fire’s spread.

At the time, reports surfaced that some of the camp counselors had been drinking, and questions arose over whether they had taken swift enough action or simply neglected their duties.

The deaths of so many children caused a massive public outcry for the government to strengthen and enforce safety standards and hold those responsible legally accountable. Sixteen people were ultimately handed jail sentences.

The blaze bears striking parallels with the recent Sewol ferry disaster on April 16 that has left hundreds dead or missing. The ship was carrying 476 passengers, many of them 11th-grade students from Danwon High School on a class trip, from Incheon to Jeju Island when it suddenly capsized in the waters off the country’s southwestern coast.

Since the accident, the government has been condemned for its poor handling of the incident. Similarly, Korea’s National Emergency Management Agency was criticized for its drawn-out efforts to identify the victims in the Sealand Youth Training Center blaze and determine its cause.

For Kim, a 1988 summer Olympian and former field hockey player on the South Korean national team, news of the ferry brought back too many painful memories.

“Please don’t suffer too much today,” she said, choking back tears, in a message on April 18 to the families of the victims. “We have to carry it for the rest of our lives.”

After emigrating to New Zealand, she opened a Chinese restaurant, Tae Hwa Ru, in Oakland with her husband, Kim Seong-ha. “I have no expectation left for this country,” Kim said in her final remarks before departing from Korea. “Leaving will be good for my other son.”

Three years later, she gave birth to a third son, Si-hyun, in 2002. Kim admitted that he looks a lot like her late son Do-hyun.

The former Olympian spoke with the JoongAng Ilbo over the phone on April 17 and 18 to discuss her thoughts on the tragedy and her take on the state of affairs in Korea.

Q. I’m sorry to remind you about your past loss, but you crossed my mind after this fatal accident [last week], which resulted in the deaths of so many young students.

A. Monstrous and horrible accidents keep repeating here. I feel a pressure in my chest from all the worry. I’m always surprised whenever I hear any news starting with ‘Korea.’

What came to your mind when you first heard the news?

The government hasn’t changed a bit. It’s only causing confusion without settling anything, and it’s still incompetent.

In your opinion, why do these fatal accidents keep happening in Korea?

Only after I came to New Zealand did I realize that the education system in Korea is wrong, and it is still that way. In New Zealand, children learn to put others before themselves. Schools motivate students to do group projects with friends and place a high value on the results of cooperation. On the other hand, Korean students are indoctrinated to make themselves the first priority. This makes them think that nothing matters as long as it does no harm to them directly. It’s obvious that the community cannot stand together under these conditions.

It seems to me that you are saying the whole country is a trouble.

Every South Korean has to change to stop the repetition of such tragedies. Everyone has to be responsible for making society safer, keeping in mind that their families can be victims. Frankly, whole country has to do their best.”

Are you saying all people in Korea are responsible for these accidents?

Looking back on my son’s death, I was at fault, too. Parents, including myself, had the responsibility to check out the campsite before we sent our children there. In New Zealand, parents do their research before their children go on field trips or go camping to ensure their security. Some even accompany the students on the trip.

In New Zealand, parents or a guardian escort children from school on their way back home until they are 12. Teachers are very conscious of their students’ safety when children leave campus in a group. This treatment changes as children grow up. They are encouraged to live independently and take care of themselves after having had a protected childhood. There is a clear division between the stage of social protection and that of independence.

Do you feel any better about the Korean government?

As a Korean living overseas, some problems have been put in perspective. I’m living in New Zealand as a permanent resident, but I am still a Korean citizen. It’s the government’s primary mission to protect their people living abroad. But Korean public officials are less conscientious about taking care of their countrymen in other countries. The government in New Zealand quickly responds when their citizens are in trouble overseas, while the Korean government is always late. The standard of protection and awareness on their own people is quite different between the two countries.

The families of the Sewol ferry victims will have a hard time reconciling that loss of their loved ones. Do you have any advice for them?

When I buried my first child, I couldn’t hold myself together. Someone once told me “not to suffer too much today because you have to do it over and over again throughout your lifetime.” I want to deliver those exact words. It is impossible to imagine what it’s like for a parent who has lost their child. Careless words from neighbors and the media worsen the pain. Kind words from those around you really help a lot.