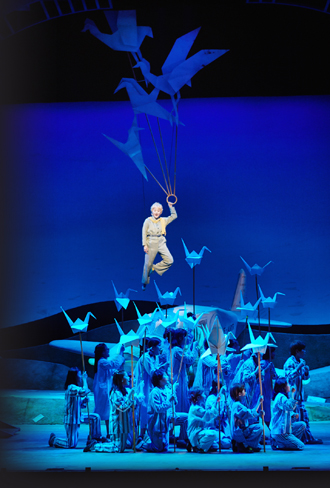 An array of family-friendly productions are ready to hit the stage on May 5 in celebration of Children’s Day. And this year, the shows aren’t just aimed at young audiences, but parents as well.

Seoul Arts Center is set to debut “The Little Prince,” one of the most beloved tales in modern Korea.

The opera was created by prominent British composer Rachel Portman in 2003 and adapted from French author Antoine de Saint-Exupery’s novella of the same name.

The performance, filled with vivid visual images and sounds, will surely evoke nostalgia among parents of the younger generations. One of the most-translated stories in the French language, the book has been touted as a must-read by school librarians for years.

Maria Bjornson’s original stage design is recreated in the CJ Towol Theater of Seoul Arts Center and largely kept intact. “Following the original stage design, props and costumes exactly did limit my creativity, but changing a little bit in some of the scenes meant a lot to me,” Director Byun Jung-joo said Friday at a press call at Seoul Arts Center in southwestern Seoul.

The dreamlike journey of the little prince is performed in English, following the original lines of Nicholas Wright, which emphasize the language’s poetic rhymes and rhythms. Korean subtitles are provided on the stage’s upper right side.

One difference in this production of “The Little Prince” is that the title role is shared by actress Ha Na-lin and child actor Kim Wu-joo.

“As a grown-up, I saw some different sides in the story that I couldn’t see when I was still young,” Ha said in front of the press.

Kim admitted that there were some parts he couldn’t easily understand, and that he is still learning the true meaning of the story by acting it on his own.

Seoul Arts Center is also planning a few outdoor events for weekends in May.

From Saturday this month, different children’s choirs will rotate performing hit musical numbers at the Shinsegae Square Outdoor Stage. On May 18, a performance by 17-year-old gugak, or Korean music, prodigy Song So-hee will mark the end of the program.

The family musical “You are Special,” on the other hand, targets younger audiences. Based on the eponymous children’s book, the production has won worldwide acclaim since its premiere in 2004.

The show, comprised of shadow acts, a puppet show and magic tricks, will undoubtedly keep the attention of its pint-size viewers.

Additionally, the original Korean animated series “Larva” will be translated on stage, which is sure to captivate children under 6 years old.