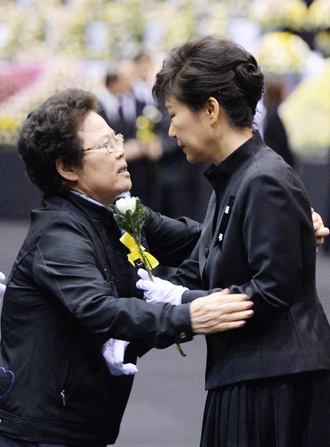 President Park Geun-hye offered her condolences to an elderly lady who was later found not to be a relative of the victims of the Sewol ferry disaster. [Joint Press Corps]

Questions have emerged over the authenticity of a photograph that appeared Wednesday on the front pages of most major national newspapers that showed President Park Geun-hye, a white chrysanthemum in hand, consoling an elderly woman at a mass mourning altar in Ansan, Gyeonggi.

The picture seemed an apt illustration of the grief felt by most Koreans following the capsizing of the Sewol ferry on April 16 in the waters off the country’s southwestern coast, which has so far left 220 people dead and 82 missing.

But as it turns out, the woman, believed to be the grandmother of one of the students killed in the disaster, was just another visitor to the shrine.

Although the original caption written with the photograph, which was taken by a member of the Blue House’s joint press corps, described the lady as “a visitor who appears to be from one of the bereaved families,” many newspapers definitively described her in those terms.

Now the presidential office is suspected of having planted the woman there for the purpose of being photographed with Park, who made a surprise visit to the memorial Tuesday morning.

Suspicions surfaced after Yoo Gyeong-geun, the father of one of the victims, wondered in an interview with a CBS radio show on Wednesday why he had never seen the woman before and why no one among the bereaved could confirm her identity.

Later in the afternoon, a news website affiliated with the radio station ran a story that claimed that the Blue House had “mobilized” the elderly woman for a photo opportunity.

The article cited an unidentified government source, who was quoted as saying: “It is true that the Blue House asked a favor from the woman, who was spotted at the altar on the day the president visited, although it had not been planned in advance.”

The videos, shot from various angles while Park was walking past the altar, show no one behind the president except the woman, known only by her surname Oh, and government security guards. In the footage, Oh follows just a few steps behind Park.

At one point, a man in a black suit comes up behind the woman and whispers a few words. Oh appears to nod her head and places a handkerchief to her mouth as if overcome by deep grief. She marches forward, after which the president turns around to console her.

The weekly Ilyo Shinmun published an online story in which Oh’s son confirmed that his mother has no relationship with the victims and had visited the shrine purely to express her condolences.

Oh, who apparently told her son she was heartbroken over the Sewol ferry disaster, also allegedly visited other mourning altars.

Still, the video led many Koreans to wonder whether the Blue House had constructed the scene and had intentionally attempted to deceive the public. The presidential office attempted to alleviate the controversy Wednesday evening and denied reports that the scene had been fixed.

“Ordinary visitors and bereaved families were both present at the mourning altar, and the Blue House could not manage to identify who was who. It’s just that one of them approached the president and said hello to her,” Min Kyung-wook, a Blue House spokesman, stated in a written briefing. “If we tried to create the scene, we would have done it in such a way so that it would have never been revealed. And creating the scene does no good for us .?.?. Such false reports rapidly create distrust among the public and divide the people and the government.”

He added that the man talking to Oh at the mourning altar was not a Blue House official but an employee with a funeral company.