Hyun speaks of resolve to ‘clean up old evils’

Hyun speaks of resolve to ‘clean up old evils’ 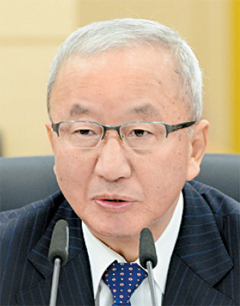 Hyun Oh-seok, deputy prime minister for economic affairs who is also the country’s finance minister, echoed President Park Geun-hye’s remarks at a ministerial meeting yesterday, demonstrating the government’s determination to “clean up old evils” after the sinking of the Sewol.

At a meeting on overseas economic affairs in Sejong yesterday, Hyun expressed his grief and sorrow over the tragedy.

“All ministries should clean up old evils and normalize abnormal practices that have been accumulated in the past,” Hyun said. “By carrying out duties faithfully, the government needs to help the victims heal and rebuild their trust in the administration.”

They were the first official remarks since Chung Hong-won, the country’s prime minister, said on Sunday that he will step down from the post to take responsibility for failed rescue operations.

Some believe Hyun was speaking as a proxy for the prime minister. They also expect Hyun’s responsibilities might be expanded, since it is uncertain when the nomination of the next prime minister will be made.

“All government officials should do their best to complete rescue operations with atonement for the people,” Hyun said.

At the meeting, the minister highlighted the importance of continuing efforts to make new free trade agreements with emerging markets and monitoring Trans-Pacific Partnership developments.

“Korea will try to offer opportunities to emerging countries to grow through FTAs,” he said.

“On TPP, the government will monitor closely on negotiations among the member countries and confirm our stance.”