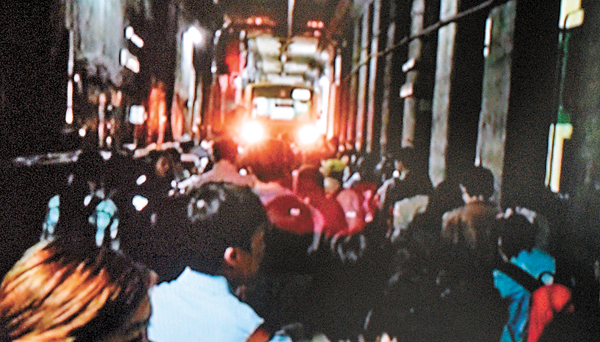 Subway passengers evacuate a train via the tracks to Sangwangsimni Station yesterday in Seongdong District, eastern Seoul. An eastbound subway train rear-ended another train on line No. 2 yesterday afternoon at the station, leaving around 200 people injured. [NEWSIS]

An eastbound train on Seoul Metro line No. 2 leaving Sangwangsimni Station in Seongdong District, eastern Seoul, was rear-ended by another train that was following it at around 3:30 p.m. yesterday, leaving more than 200 people onboard both trains injured.

The impact was so strong that the two passenger cars at the end of the lead train detached and derailed.

More than 1,000 passengers from both trains had to open the car doors manually to walk out onto the platform, and others had to walk down the tracks.

Within minutes of the accident, dozens of ambulances were dispatched to the station, and more than 170 injured people were evacuated to 12 hospitals, according to Kim Gyeong-su, head of the Gwangjin Fire Station.

He added at a briefing later yesterday that more passengers could have been injured. Only those taken to hospitals by ambulance were counted among the injured. The confirmed number of wounded is expected to be around 200.

Subway authorities immediately stopped other nearby trains on line No. 2 that were headed in either direction. They later resumed the operations of westbound trains at a slower pace, while suspending eastbound trains along 10 stations from Euljiro 1(il)-ga Station to Seongsu Station.

“The train I was on was going to Wangsimni Station, [the next station east of Sangwangsimni Station],” said Kim Tae-young, a 26-year-old passenger on a nearby westbound train, “but it suddenly moved backward and dropped passengers off at Hanyang University Station.”

To minimize disturbances from the accident, authorities increased the number of buses that pass by Sangwangsimni Station.

Seoul Metro, the operator of the subway line, held a briefing later yesterday and said it is still investigating the exact reason for the accident.

“When we questioned the driver of the following train, he said a ‘clear’ signal suddenly changed into a ‘stop’ signal, and he could not avoid the crash because the gap between the two trains was too short to stop,” said Jeong Su-yeong, an official from Seoul Metro.

He added that five recovery teams comprised of 150 people were deployed to the station, and that it would take four to five hours to normalize subway operations.

The Ministry of Land, Infrastructure and Transportation also organized an emergency task force.

Seoul subway lines have experienced a slew of technical problems in recent months.

On April 2, a line No. 2 train suddenly came to an abrupt stop at Seolleung Station because its automatic brake function was not working properly. The next day, another train on line No. 4 heading back to a garage in Siheung, Gyeonggi, derailed between Sookmyung Women’s University Station and Samgakji Station.

After these incidents, the ministry ordered subway operators in Seoul to conduct special safety inspections.

The incident yesterday was just one in a series of recent accidents in Korea that has left citizens stunned and lead to concerns regarding public safety.

“The entire country is suffering from anxiety and stress after 10 people died in a roof collapse at the Mauna Ocean Resort in Gyeongju and more than 200 people died in the Sewol ferry accident,” said a man who resides in Seoul. “I can’t believe this happened on top of this.”

A few others said the recent events were reminiscent of those in the early 1990s - namely, the Seohae ferry sinking in 1993, which led to the deaths of nearly 300 people, and the Seongsu Bridge collapse in 1994. The following year, the Sampoong Department Store collapsed, killing more than 500 people and injuring hundreds more.