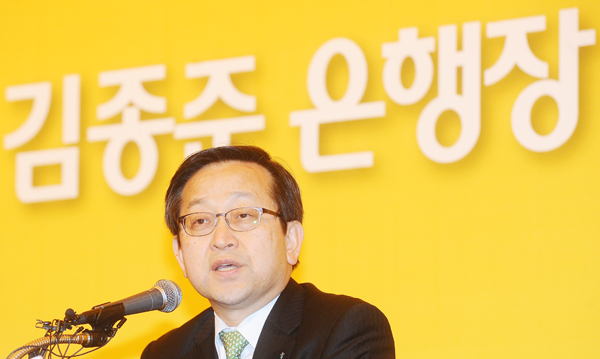 Astana, KAZAKHSTAN- Tensions continue to grow between the defiant Hana Bank president and the financial authority that penalized him last month.

Hana Bank President Kim Jong-jun attended the Asian Development Bank’s annual meeting held in Astana, Kazakhstan, last week but his presence came as a surprise. Many assumed that he wouldn’t show up at the annual event after the penalty leveled against him by the Financial Supervisory Service.

The banking industry is under increasing public scrutiny due to multiple personal information breaches and incidents of loan fraud that have surfaced since the beginning of the year.

KB Kookmin Bank President Lee Kun-ho, Woori Bank President Lee Soon-woo and the heads of state-owned financial companies such as the Korea Development Bank and the Industrial Bank of Korea all backed out of the ADB meeting at the last minute. The only major banker who planned to attend the event was Shinhan Bank President Seo Jin-won, because Shinhan is the only Korean bank that has a branch in Kazakhstan.

“I have nothing special to say,” Kim told reporters at the ADB event on Sunday. “I have never said I wasn’t coming [to the ADB meeting] and I came here as planned.”

Kim was visibly shaken when he accidentally encountered a group of Korean reporters at the ADB conference. Hana employees actively tried to block the chief banker from reporters.

When asked if he plans to finish his term at the bank, which ends in March, he refused to comment.

Last month, the FSS hit Kim with a heavy penalty, practically ousting the banker from the financial industry by banning him from getting hired at any financial company for the next five years. Kim is accused of granting ill-advised loans to an ailing savings bank while he was president of Hana Capital in 2011. Hana Capital failed to recover more than nearly half of the loan.

He is also accused of tampering with documents, including board of directors meetings.

The FSS penalty is not legally binding. But while other bankers who have been issued the penalty have stepped down in a timely manner, Kim has showed no interest in ending his term as president of Hana Bank early. Even if he finishes his term, Kim will not be able to stay on as president next year.

According to officials within Hana, most of the high-level executives agree that the absence of a president would create confusion within the organization at a time when efficient management is needed.

According to a recent study by the FSS, Korean banks have seen a 25 percent reduction in net profit in the first quarter compared to the same period last year.

While the banking industry is monitoring the situation, Bahk Byong-won, chairman of the Federation of Korean Banks, said that forcing a CEO to step down would solve nothing.

“Would every problem be solved when the CEO is changed?” Bahk asked. “Putting all responsibilities on a CEO is not the best way [to resolve problems],” the chairman noted.