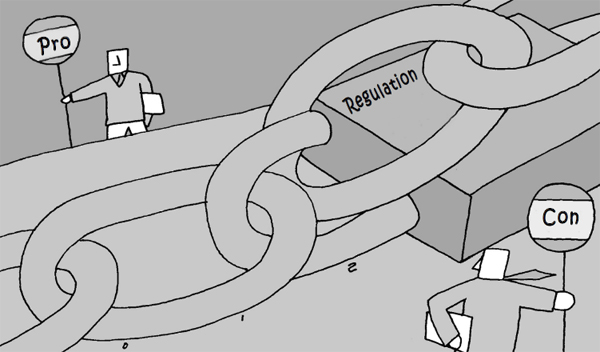 Cornered by criticism, the government responded that it will not ease regulations on consumer protection. It sounds like regulations in other areas will be relaxed as planned. However, the government’s ambitious drive for deregulation has lost momentum after the ferry accident. It cannot afford to focus on other policy areas as long as the ferry tragedy is still a hot issue among the public. No bureaucrat will be daring enough to pursue deregulation at the moment.

At a cabinet meeting last month, Prime Minister Chung Hong-won ordered ministers to review safety measures and prepare ways to improve the practices, systems and rules that are supposed to ensure the safety of the common folk. Accordingly, the Ministry of Land, Infrastructure and Transport has excluded systems related to the safety of roads, rails, aviation, buildings and special structures from deregulation and is considering strengthening some safety regulations. The projects dedicated to regulation reform are virtually suspended now. The president presided over a seven-hour ministerial meeting on deregulation in March, but it is hard to imagine any follow-up action.

We need to carefully examine whether or not blaming deregulation for the ferry disaster and suspending all deregulation measures is reasonable. First, it may seem plausible that a relaxation in the age limit for ferries caused the accident. But the Sewol’s age was not the sole cause of its capsizing. More direct causes were the loading of excessive cargo, irregular loading methods and release of the boat’s ballast water. The ferry’s age and its navigation equipment, so far, haven’t come into the picture. The accident happened because the regulations that applied to operations of the ferry were not observed. Also, the supervisory function of regulations did not work at all. It is true that old ships are more prone to accidents than new ones, but even a new ship will be hazardous if its crew does not follow the safety regulation and operates it irresponsibly.

This accident did not come about because of an absence or relaxation of regulations - but because the existing regulations were ignored.

If you look at the accident from another angle, you can see that regulations are not a cure-all that guarantee safety. While ferry operators have to report their fare systems, they are in fact regulated by the government. The Port Administration adjusts the fare once every four or five years. It would be nice if the fare set by the government yields profits. But unfortunately, the regulated fare is always low. In order to operate ferries profitably, companies unlawfully add cabins, illegally overload cargo and hire unqualified crew members at lower wages. Moreover, they have to collude with supervising agencies in order to continue such illegal and unlawful measures. Retired civil servants are sent to work at supervising agencies and often have corrupt relationships with the companies they supervise. Government control of ticket prices leads to a corrupt nexus of civil servants, retired bureaucrats and ferry operators.

So it is a serious leap of logic to suspend all deregulation efforts and to introduce new regulations to prevent similar disasters in the future. Of course, pushing for deregulation does not mean relaxing safety-related regulations. We should be very careful when easing regulations related to safety. But we cannot blame deregulation for all of Korea’s problems.

The Sewol ferry tragedy provides us with a chance to look back on the flaws in our society, but that does not mean the need for regulation reform has disappeared. Removing a major obstacle to economic growth is just as important as the safety of the people.