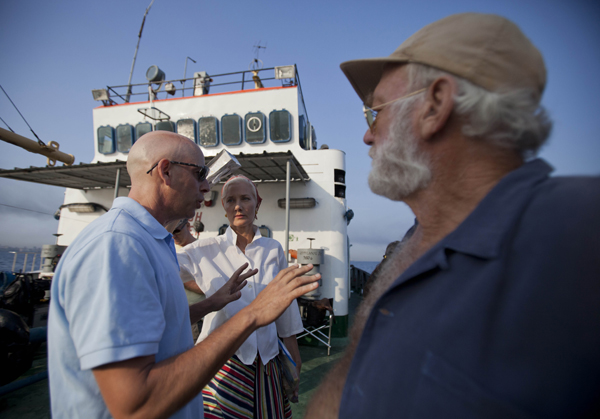 HAVANA - Rebels allied with a young Fidel Castro burst into the street outside Havana’s Government Palace as soldiers loyal to strongman Fulgencio Batista rain gunfire from above. Steps away, Ernest Hemingway and a young journalist friend dive for cover behind a parked car.

An international film crew in recent weeks has been re-enacting this and other historic scenes in the streets of Havana for “Papa,” a biopic about the budding friendship between Hemingway and the reporter in the turbulent Cuba of the 1950s.

Years in the making, producers say it is the first full-length feature film with a Hollywood director and actors to be shot in the country since the 1959 revolution.

Due to decades of ill will between the two countries and Washington’s 52-year-long embargo, other movies ostensibly set here, such as “The Godfather Part II” and 1990’s “Havana,” were filmed in stand-in locations like the Dominican Republic.

“It was an absolute passion to actually make it in Cuba where everything that is in the script happened, where the finca [farm] is where [Hemingway] lived, where his boat was, all the spots from the Morro castle to Cojimar where he fished,” director Bob Yari said. “It’s all here, so trying to duplicate it somewhere else was not very appealing.”

Shooting began in March and wrapped over the weekend on the joint Canadian-Cuban-American production, with the island’s governmental film institute known as Icaic providing location support, period costumes and local actors.

“Papa” came to Cuba under a U.S. Treasury Department license exempting it from most embargo restrictions. The film’s makers said there was a cap on how much they could spend but would not say how much or release overall budget figures.

For licensing purposes, the movie qualified as a documentary, since it depicts a firsthand account of real events that took place here. So it’s unlikely just any Hollywood blockbuster would get the same permission in the future.

Though the title derives from the Nobel Prize-winning novelist’s nickname, the movie is based on an autobiographical script by Denne Bart Petitclerc, who is played by Giovanni Ribisi (“Avatar,” ‘’Saving Private Ryan”). Hemingway is portrayed by theater and screen veteran Adrian Sparks.

Petitclerc was abandoned by his father as a young boy, fell in love with Hemingway’s writing and later came to see him as a father figure.

While working for the Miami Herald in the 1950s, Petitclerc wrote a letter to Hemingway professing his admiration. He didn’t intend to send it, but his girlfriend found it and dropped it in the mail.

On a recent Saturday, a reading room at the University of Havana library stood in for the Herald newsroom. Cuban extras milled about in slim ties and saddle shoes, long skirts and horn-rimmed glasses. Vintage typewriters clacked away.

The scene retells the moment when Petitclerc, known as “Ed” in the movie, fields a fateful phone call that at first he thinks is a prank by one of his pals.

“Good letter, kid,” says Hemingway. “You like to fish?”

Before long, Ed is on a boat with his idol, and the two strike up a friendship that would last until Hemingway’s 1961 suicide.

The film crew got access to some of Havana’s most iconic locales, including the former Government Palace, which long ago was turned into a museum celebrating Castro’s revolution. At the majestic Grand Theater, which is closed for restoration, a sumptuous salon was tricked out to look like the bar of the Ambos Mundos hotel where Hemingway frequently stayed.

Hemingway lived in Cuba from 1939 to 1960 and wrote much of “The Old Man and the Sea” and other works here, and islanders claim him as much as Americans do.

“Hemingway was probably the most prominent American to make Cuba his home, and I think the people of Cuba to this day cherish him and love him,” said Yari.