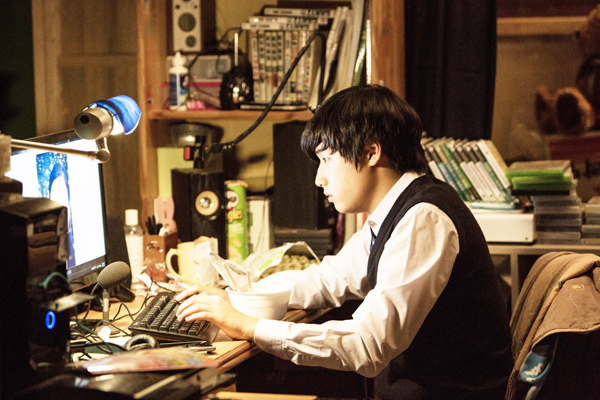 “Mad Sad Bad” is a 3-D omnibus film consisting of the works “Ghost,” “I Saw You” and “Picnic.” The movie opened at this year’s Jeonju International Film Festival and set tongues wagging by fusing 3-D with melodrama. Provided by the festival

JEONJU - Korean cinemagoers have enjoyed 3-D and 4-D cinema experiences through the countless Hollywood blockbusters released in both formats. But for the most part, the local film industry has shied away from producing in 3-D.

So when “Mad Sad Bad,” a 3-D omnibus film, was announced as the opener for the Jeonju International Film Festival, people were curious to see how the technology would be adopted in a movie comprised of three independent shorts.

At the festival’s opening last week, the organizing committee’s chairman, Ko Suk-man, said that the film would give a unique glimpse into how 3-D technology is used differently in Korea compared to the United States.

Ko added that the unique local approaches undertaken by directors Ryoo Seung-wan, Han Ji-seung and Kim Tae-yong would shake things up and question where the beauty of 3-D technology lies.

Ryoo, who directed the first of the three shorts, said that unlike his previous works, which were shot mostly in short frames, “Ghost” relied on close-ups.

Based on a real-life Sinchon murder case from two years ago, the film gives a detailed look at the strange dynamics of an online chat room and its users who plot to kill a member’s ex-boyfriend.

Of the three shorts, “Ghost” had the most potential to use 3-D. Unfortunately, the technology was wasted on chat pop-ups and street signs.

“SNS in contemporary society has changed how people interact and connect,” Ryoo said of his decision to use 3-D chat room alerts as the focal point of the narrative. “I guess the way I look at this is highlighted in the movie.”

Three-dimensional technology aside, Ryoo said he still doesn’t quite understand the events that unfolded in his short.

“When I first heard about the incident, I was puzzled, and this is the reason I directed the film,” said Ryoo. “I started wondering how this was possible and tried to understand how it happened.”

In order to comprehend the facts of the case, Ryoo spoke to third parties rather than those directly involved in the crime.

“I still can’t empathize with the characters or understand the situation,” said Ryoo, adding that he wanted to stress the fact that “these things can happen anywhere at anytime to anyone.”

Han Ji-seung, who directed the zombie romance “I Saw You,” or the “Sad” component of the film, said that even with the project completed, he was also “still not used to 3-D.”

“Visually, it’s not just layering, but you have to pay attention to reflections, placements, etc.,” said Han.

Although “I Saw You” doesn’t bring anything unique in terms of 3-D technology, Park Ki-woong delivers an unusual and powerful performance as an uptight human who is afraid he will turn into a zombie.

As a manager at a factory full of zombie workers, Park paints a picture of a comical yet tyrannical boss who is obsessed with productivity and the fear of a reinfection. He pops copious amounts of pills every day to keep the disease in check, although he knows this is making his memory dissipate.

But there is something in his dreams that beckons him to remember an event from his past, and before long a zombie romance unfolds.

“I thought the most important thing to all life forms was love,” said Han on fusing love and creatures associated with death. He explained that he tried to tap into “emotions” above everything else.

Of the three shorts, the crowd-pleaser was the “Bad” section’s 7-year-old star Kim Soo-an, who played the older sister of an autistic boy in “Picnic.” Fed up with her brother, she tries to leave him behind at a temple.

When asked what he focused on, director Kim Tae-yong said he tried to “keep the camera on the beautiful actress.”

And the young actress, with her wide range of emotions, knows how to hold a viewer captive.

In the short, 3-D imagery itself plays a relatively low-key role, something Kim was mindful of when he decided to try out the technology.

“I wasn’t sure that 3-D was the best way to connect the narrative to viewers,” said the filmmaker. “Sometimes it works, sometimes it doesn’t,” said Kim, adding that he felt 2-D had more power to resonate with viewers.

As all three directors affirmed, 3-D technology is still a learning curve for them, and the three shorts showed that there might be room for 3-D production outside of the action genre.

The film opens on May 15 nationwide.