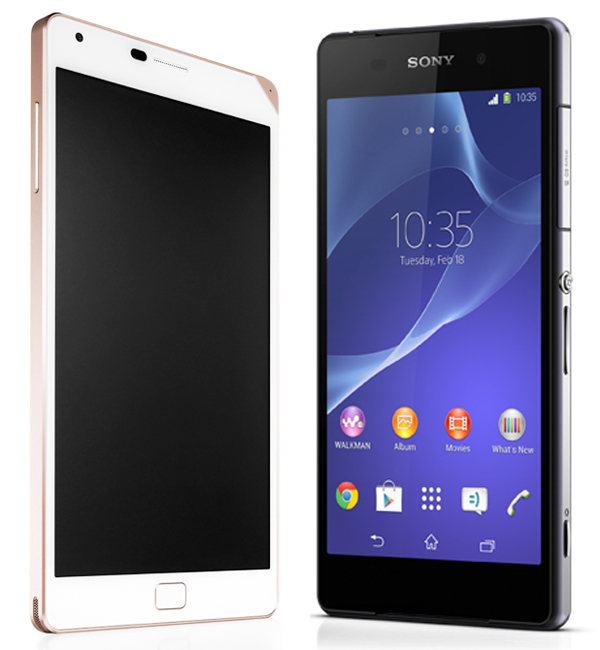 Pantech, Korea’s smallest mobile phone maker and Japanese electronics maker Sony both debuted new smartphones in Seoul yesterday in an attempt to play a more significant role in the Korean smartphone market, where Samsung Electronics has a 70 percent market share.

Pantech held a press conference ahead of the release of Vega Iron 2, which has the largest battery capacity of all smartphones in Korea at 3,220 milliampere-hours and a 5.3-inch full high-definition (FHD) display. Sales of the phone will start on Monday.

Whether these phones succeed or fail could could go a long way toward determining that fate of both companies.

For Pantech, which recently entered the second round of a debt workout program, the Vega Iron 2 may be its last ditch attempt to survive in the domestic smartphone market.

“We launched a new product that goes far beyond the previous model by actively reflecting consumers’ opinions,” said a spokesman for Pantech.

Pantech is counting on its design and battery capacity to counter competitors.

“At the early stage of the smartphone era, there were more consumer demands for state-of-the-art technologies, but recently the trend is that people put as much emphasis on great design as on technology,” said the Pantech spokesman.

The phone has the same seamless metal frame of the previous model but has a bigger screen with a Super Amoled (active matrix organic light-emitting diode) display.

As opposed to phones that use plastic made to look like a metal frame, the Iron series uses a diamond cutting process on its metal to make it look more refined.

Though the phone has a larger capacity battery than previous Vega phones, it is lighter and thinner.

The phone’s battery can be charged in 110 minutes. Its camera has a Wide OIS (optical image stabilizer) feature to make pictures look clearer.

Sony, which is selling its PC brand Vaio due to deterioration in profitability, also is tempting fate with its mobile phone offerings.

It is questionable whether the Xperia Z2 will help Sony expand its market share in Korea, which is often dubbed a graveyard for foreign mobile phones.

Nokia, Motorola and HTC all failed to expand their presence in Korea due to strong top players such as Samsung, Apple and LG Electronics.

But Sony’s Xperia Z2 may stand a chance, since it is built around Sony’s optical and Walkman audio technology.

Sony said at a press conference yesterday the phone has a 20.7-megapixel camera, which is superior to other phone cameras, and a 4K (UHD in Korea) video recording feature that produces video four times clearer than that of HD TV. That means the quality will be noticeable when the video is played back on a UHD TV. It is the first smartphone with 4K video capabilities.

Sony also highlighted the phone’s design, which has a 5.2-inch full HD scree with Triluminos Display for mobile that enhances colors with LED technology, and an aluminum frame.

Along with the smartphone, Sony introduced a wearable device smart band called the SWR 10.

Sony Korea will give the smart band to customers who purchase Xperia Z2 during the presale period.

But Pantech and Sony still face many hurdles before they can break the stronghold of Samsung, Apple and LG.

Pantech must cooperate closely with mobile carriers to make up for its slumping smartphones sales due to the carriers’ operating bans.

Sony will mainly sell handsets independently at its online and offline stores and at open markets instead of through mobile carriers’ retail networks.

As it is an unfamiliar sales practice in Korea, it remains to be seen whether consumers will adapt to the purchasing method.