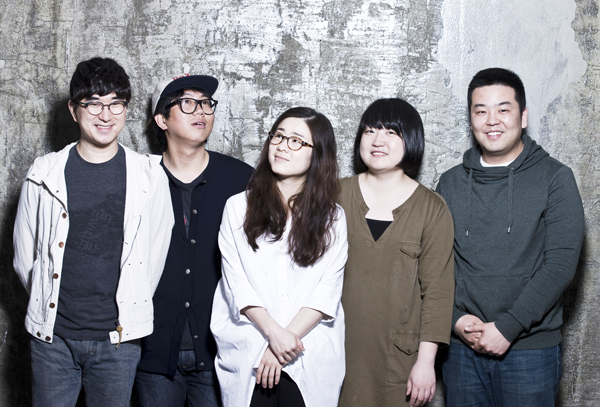 Poet Cheon Sang-byung (1930-93) of “Return to Heaven,” who was known for expressing his greed-free spirit by using simple, candid language, has recently been summoned back to us.

Cheon, a lyricist remembered by the older generation as a simple kind of guy who is content with just a cup of coffee and a pack of cigarettes, is the inspiration behind indie group Amado LeeJaram Band’s new album, “Crazy Vagabond.” The band took seven of Cheon’s poems, such as “Flute,” “My Poverty Is” and “Moonlight,” and reinterpreted them in their own unique way.

The band’s first encounter with the poet goes back to 2010 when they attended the Cheon Sang-byung Art Festival. At that time, the band didn’t know anything about Cheon’s poetry, except for “Return to Heaven.”

“It was actually a good thing that we didn’t know that much about him,” said Lee to the JoongAng Ilbo, an affiliate of the Korea JoongAng Daily. “It helped us to work with his poems in a way in which we would treat the guy next door rather than paying him all the respect we were supposed to.”

Owed partly to this, the group’s songs are filled with everyday words, removing the symbolic and figurative language from the poems. For example, “Crazy Vagabond,” one of the album’s tracks, was interpreted in a hard-rock style to express the tougher aspects of the poetry.

When asked what Cheon would say if he heard these songs, Lee Min-ki, the guitarist, said, “I think he will say ‘Ah, it’s good. Good, very good,’ because in the poet’s essays, he always used to say ‘good’ three times in a row if he really liked it.”

“I think he would ask us to have a drink with him,” said Lee Ja-ram. “He believed that our lives could be made joyful with just a few drinks.”

Amado LeeJaram Band debuted last year with the full-length album “Debut” and has pursued a music career by putting on numerous concerts.

“Our first album was about compiling the music we created individually before forming the band,” said Lee Ja-ram. “But the Cheon Sang-byung album was collective work we did together. Now, we will sound like a real band where members combine forces to make music.”