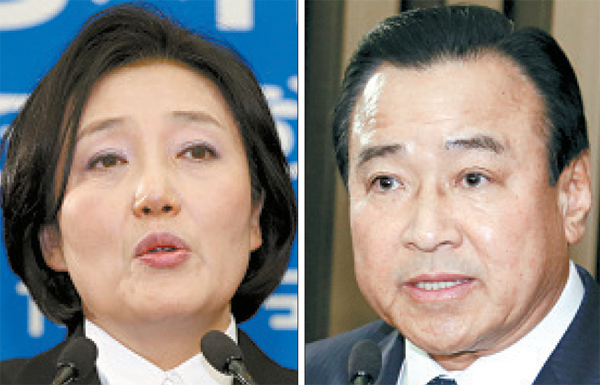 Both the ruling Saenuri Party and the main opposition New Politics Alliance for Democracy (NPAD) yesterday picked a primary for their floor leaders for the coming year.

Lee’s electoral precinct is Buyeo, South Chungcheong. The Gyeongsang region is a traditional stronghold for the ruling party. Park and previous presidents Lee Myung-bak and Roh Moo-hyun all hail from the country’s southeastern region.

Three-term lawmaker Park Young-sun was elected as NPAD’s floor leader, becoming the first female floor leader of any political party in Korea. The TV reporter turned politician beat out Representative Noh Young-min by a margin of 10 votes in the selection process, in which 128 members participated.

“I feel grave responsibility,” she said in an address following her election. “I will discuss with each and every lawmaker the tasks ahead of us before making a decision … The Republic of Korea is in mourning over the Sewol ferry disaster, so it is high time that the NPAD brings about new change and creates new energy.”

She also vowed to spearhead the move for the National Assembly to launch an investigation into the ferry accident and to form a committee to come up with countermeasures to prevent such incidents from happening again. Representative Park also pledged to open an extraordinary session this month and made it clear that the main opposition party would take a firm stand against the ruling Saenuri Party and the Park Geun-hye administration. “We would keep the main party in check on behalf of the people,” she said, given that President Park “will not take responsibility for the people.”

Joo Ho-young, a former judge, was elected as chief policy maker to serve as Lee’s running mate. Both Lee and Joo ran unopposed, and ruling party members unanimously selected them without a vote in the general meeting.

Afterward, Lee, the new Saenuri floor leader, promised he would give candid advice to the president, as “healthy tension” between the party and the Blue House is necessary.

But he took a prudent stance over the demand from the opposition that the National Assembly carry out an investigation into the Sewol accident. “I will approach the matter by deliberately discussing it with the opposition party and obtaining mutual understanding from the media as well as our lawmakers,” he said, adding that dozens of passengers who were onboard the doomed ferry remain missing.

Lee was elected as South Chungcheong’s governor in 2006 under the previous Lee Myung-bak administration. He opted to step down, however, because at the time he and Park Geun-hye, who was then a lawmaker, opposed the government’s move to amend the Roh Moo-hyun administration’s plan to turn Sejong City into an administrative capital. The Lee administration tried to transform Sejong into a technology hub instead.