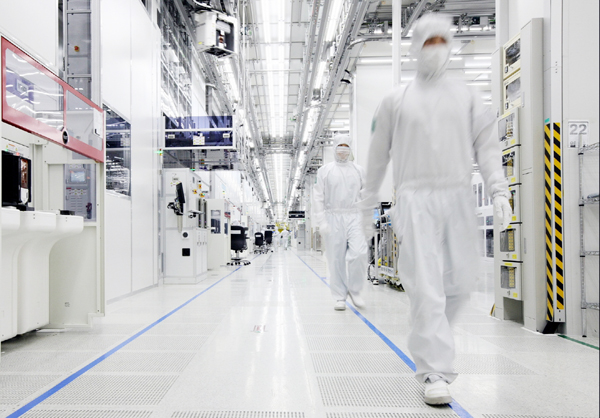 Samsung Electronics said yesterday it held an inauguration ceremony for its first semiconductor fabrication factory in China Friday, as the world’s largest memory chip maker tries to respond to the fast-growing market for mobile chips in China.

China accounts for around 50 percent of the global demand for NAND flash memory, which is used to store music, photos and videos on mobile devices such as smartphones. That type of memory chip is also being used for Solid State Drive, which is replacing hard disks for data storage or transfer.

3-D V-NAND flash memory is Samsung’s invention to cope with narrowing room for innovation in horizontal accumulation of information. 3-D V-NAND can store up to 128 gigabits of information with technology that expands storage space by storing information vertically.

Samsung broke ground on the 230,000-square-meter Xi’an plant in September 2012. In a 2012 release, the company said it would invest $7 billion in the plant including $2.3 billion on the first stage of construction.

The company said yesterday it will complete the construction of the entire Xi’an complex, including an assembly facility and test line, by the end of this year.

The Xi’an plant is the company’s largest overseas investment in semiconductor production. The company also has a semiconductor fabrication plant in Austin, Texas.

The launch of the Xi’an factory gives the company a three-pillared global semiconductor production system, Samsung said. Samsung’s U.S. factory is focused on system semiconductors, while its Chinese factory specializes in memory chips. The Hwaseong factory, which produces all types of semiconductors, will play a bridging role for the other two production bases, the company said.

The Xi’an fabrication line is also laying the foundation for a more stable supply of memory products to customers, Samsung said. Around 60 subcontractors of Samsung Electronics are operating in Xi’an. The number of those companies will grow to 100 in the near future, Samsung said.

“The city of Xi’an was the starting point of the Silk Road, which played a key role in bridging the cultures of the East and West,” said Kwon Oh-Hyun, a vice chairman and the CEO of Samsung Electronics during remarks at the inauguration event. “We expect that our new facility in Xi’an ? the fruit of close cooperation with China ? will mark the crowning of a 21st century Silk Road.”

Lou congratulated Samsung, noting that the Xi’an plant highlights the special partnership and efficient cooperation between China and Korea, Samsung said. He promised the province’s support.