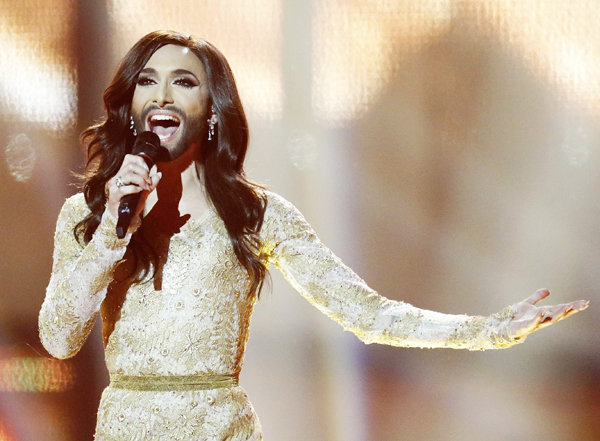 Singer Conchita Wurst representing Austria performs the song “Rise Like a Phoenix” during the final of the Eurovision Song Contest in the B&W Halls in Copenhagen, Denmark, on Saturday. [AP/NEWSIS]

COPENHAGEN, Denmark- Austrian bearded drag queen Conchita Wurst won the 59th edition of the Eurovision Song Contest on Saturday with a James Bond-inspired entry that had unleashed a wave of protests in eastern Europe before the competition.

The power ballad, “Rise Like a Phoenix,” helped Wurst - the alter ego of 25-year-old Thomas Neuwirth - secure Austria’s second victory in the competition with 290 points. The country also won in 1966.

“This is dedicated to everyone who believes in a future of peace and freedom,” a tearful Wurst said as she accepted the trophy from Denmark’s Emmelie de Forest, who won the contest last year. “We are unity.”

Pushing the boundaries of gender identity is nothing new at Europe’s annual song contest, an extravaganza known for its eclectic, sometimes unlistenable lineup of techno beats, love songs and pop tunes. The winner in 1998 was Israel’s Dana International, who had male-to-female gender reassignment surgery several years before competing.

Still, Wurst had been faced with some protests before the competition, highlighting a rift between Europe’s progressive liberal side and the traditional values and nationalist rhetoric of Russia and some other nations taking part.

Amid growing tensions over the Ukraine crisis, some in Eastern Europe have blasted Wurst as an example of the West’s decadence. Activists in Belarus had even urged the country’s state television network to bypass the live broadcasting rules by the organizers and edit the Austrian entry out of its Eurovision transmission.

After her victory, Wurst told reporters she hopes gay, lesbian, bi and transgender people around the world are getting stronger in their fight for human rights.

Asked if she had anything to say to Russian President Vladimir Putin, who introduced a law last year prohibiting so-called gay “propaganda,” Wurst said, “I don’t know if he is watching this now, but if so, I’ll say it: We’re unstoppable.”

In Vienna, the Austrian capital, fans who had gathered at one of the public viewing parties chanted “Conchita” ecstatically after the victory. Some had painted on fake beards in support.

Neuwirth, who was born in Gmunden, central Austria, entered show business eight years ago, taking part in an Austrian TV talent show. After joining a boy band that quickly broke up, Neuwirth first appeared as Wurst in another Austrian talent show in 2011. She also took part in two reality shows, including one where candidates had to survive in the Namibian desert together with native tribes.

Juries and television viewers across Europe selected her as the winner ahead of The Common Linnets from the Netherlands with 238 points and Swedish singer Sanna Nielsen with 218, meaning next year’s contest will be held in Austria.