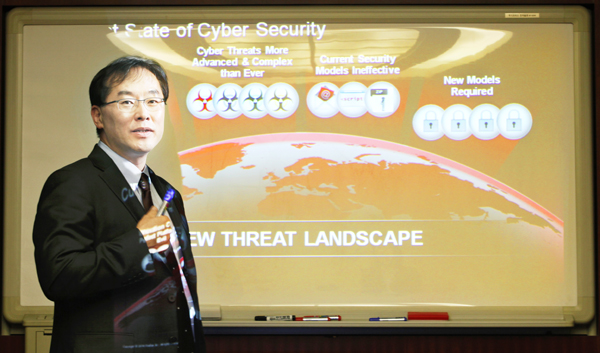 FireEye has been the leader in protecting computers, networks and servers from a new generation of threats known as advanced malware and advanced persistent threats (APT), which easily bypass traditional signature-based defenses.

FireEye has invented a purpose-built, virtual machine-based platform that provides real-time threat protection to organizations across all major threat vectors and each stage of an attack.

“FireEye has the world’s first technology in the security sector,” Jun said. “Existing programs could only detect malware after PCs or networks are hacked, but FireEye’s technology offers pre-emptive defense against advanced threats.”

Jun, who started his career in the IT business division at Samsung C&T, has been working in the security sector for 14 years since networks that connect servers and PCs emerged.

He worked for Blue Coat Systems, a U.S.-based security company for three years before joining FireEye in 2012.

Jun said he decided to join FireEye because of the company’s unique security technology and because he predicted that the security market would move toward developing preventive platforms against cyberattacks.

Q. What do you mainly do as a country manager of FireEye?

A. Since I joined FireEye Korea, what I do here is mainly sales activities because it is a regional office for the U.S.-based company. However, besides sales activities, I have been contributing to Korea’s security industry by making agreements with many public institutions.

When we detect pre-attack signs, we let public organizations know and share our analyzed data on new kinds of cyberattacks with each other.

In addition, by providing our products and solutions based on the technology to detect signs of malware or a cyberattack in advance, which is the first of its kind in the world, we are not only raising the level of security for our clients, but also helping improve technologies for domestic security companies.

They can be our competitors but at the same time, we also call them partners in the same industry. By introducing the new technology in the Korean security market, we contribute to the overall progression of technology in this industry. 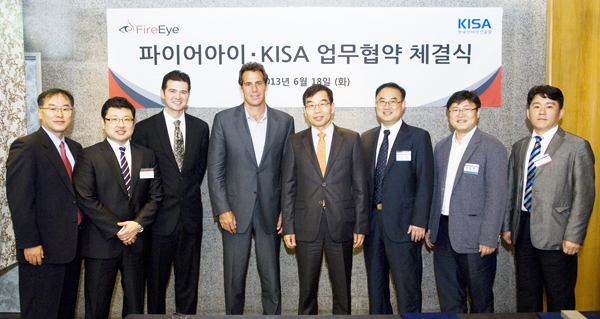 FireEye Korea and the Korea Internet Security Agency (KISA) signed a memorandum of understanding. On the left is Country Manager Jun Soo-hong, fourth from left is CEO Dave DeWalt and fifth from left is KISA President Lee Ki-joo. Provided by the company

Although FireEye is the pioneer in the preventive security defense market, the company is unfamiliar to most people. What kinds of security systems do you provide?

To explain it simply, those who implement security systems first are those who need to protect their properties, whether it be money or sensitive information.

Hacking also happens when hackers decide that there are economic benefits or political ends. The first targets are mostly enterprises and public institutions.

We believe that individuals can now also see the damage caused by such attacks on companies and public organizations.

Thus, we provide these enterprises, organizations and even the government platforms that supplement traditional security defenses, such as traditional firewalls and gateways, which cannot stop advanced malware, leaving significant security holes in corporate networks.

Our products and solutions prevent hacks through real-time blocking, detecting known and unknown threats, containing the malware to stop the impact of an attack and resolving the problem in a timely and cost-effective way to limit exfiltration and serious business impact.

Although individuals might not be familiar with it, cyberattacks are aimed at ruining the infrastructure of public institutions.

The recent hacking incidents on financial institutions and mobile carriers also had a large impact on individuals, who are the customers of these enterprises, in terms of information leakage. The actual damage is on individual people.

We need to protect the infrastructure of companies and public institutions to protect individuals.

Who are the major clients of FireEye?

Our main clients are Internet companies, portal companies in particular, which provide search engines, or companies that have business models based on the Internet.

Another group of clients is composed of companies that have global technology because they try to protect their own technology and information.

Social infrastructures run by the government - such as public goods, energy and transportation sectors - also use our products and solutions.

As cyberattacks diversify, hospitals are also becoming our clients because the computers and networks used in surgery rooms have also been the target of malware for financial purposes.

In case of law firms, hackers often seize critical information and hand it over to the other side so that they can prepare a defense that will win a case.

It happens a lot more in the United States, but we are currently discussing such issues with Korean law firms as well.

A team of employees of FireEye Korea, including Jun Soo-hong, country manager, fifth from right, poses at the Asia-Pacific and Japan meeting held in Singapore last July.

Recently, Korea’s security has been on the chopping block due to a series of hacking incidents at credit card companies and mobile carriers that leaked millions of people’s private information. Why do you think that Korea’s security is so weak, while the nation is regarded as a powerhouse of IT?

Many claim that Korea’s security is lacking because the IT industry is focused more on establishing infrastructure as fast as they can so people can begin using them.

In the early ’90s when the Internet first emerged, the IT industry had to spread the good news to people so that it could come into wide use.

Also at the time, hacking for financial purposes almost did not exist. People in the IT industry predicted that hackers would develop cyberattacks in order to gain technological superiority, but they did not expect that hackers would bring about this much damage to enterprises, governments and individuals.

As time went by, cyberattacks seeking financial benefits spread quickly and technological security could not catch up with the technology for malware and advanced cyber threats.

Also, investment in the security industry was not made persistent in fostering human resources.

When the Internet of Things is realized, the importance of security is expected to be magnified. How is FireEye Korea preparing for the new IoT era?

However, the operating system, especially Google’s Android, is very susceptible to cyberattacks. Thus, we developed mobile threat prevention, which detects malware in the Android system and resolves it.

Recently, we also have found security vulnerabilities in Apple’s iOS, which leaks location-based information. Apple did not even known about it until FireEye detected the problem.

We also provide services that check the safety of apps on Google Play, to check if they include malware that can spread to smartphones once they are downloaded.

It was reported that more than 5,000 advanced persistent threats (APT) occurred in the world last year and Korea was the second most attacked country after the United States. Why?

Korea has a large infrastructure for the Internet, many Internet activities, and contents and services are provided through the Internet. It is natural that the country has been vulnerable to cyberattacks.

What do you think is FireEye’s role in the Korean market?

We hope to build an ecosystem for technology in the security sector. Currently, there are not many work forces and human resources in the industry. The environment and infrastructure supporting the security industry is weak in Korea.

I believe that there should be more human resources fostered to defend cyberattacks and malware threats. As our technology is superior in this area and we have a lot of information, we are seeking ways to cooperate with Korean security companies.

By creating such an ecosystem, I also expect that FireEye could contribute to job creation. There has been a prejudice that foreign companies only draw money out of Korea, but that is simply not true. When advanced technologies come into Korea, new businesses derived from it continue to emerge and more opportunities are made for young job seekers. These businesses and job opportunities will remain in local markets even if a foreign company leaves.

Lastly, What would be your management philosophy?

First of all, as a regional office, FireEye Korea will have to conduct business to correspond to the company’s goal.

Third, internally I am trying to encourage our employees at the Korean office, currently 19, to closely cooperate rather than working individually.

I have always emphasized “self sacrifice” as a prerequisite for this branch office and encouraged them to work in teams. 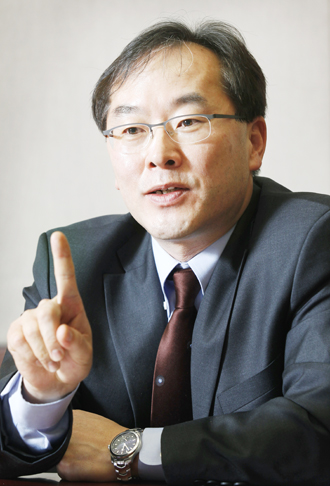