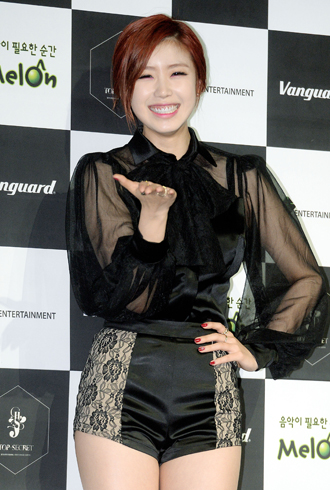 Jeon rose to fame for her glamorous and sexy image, and she was dubbed Korea’s pin-up girl.

“My lead-off title is ‘Good-night Kiss,’ which is also composed by Double Sidekick –Mike and Park Jang-geun ¬– who recently worked with T-Ara’s Ji-yeon and G.Na,” said Jeon while smiling in front of the press.

The 25-year-old singer noted that she is very excited to be back on stage with her K-pop idol colleagues.

“If I had to promote my album alone, that would’ve been too lonely,” Jeon said.

Jeon also added that her lively performances are a bit different than others.

“Ji-yeon and G.Na are both skinny! But I, on the other hand, look healthier. I hope to give energy to all my fans through my song,” she said.
Her new album was released yesterday in stores and online. She will appear on major music programs starting this week.