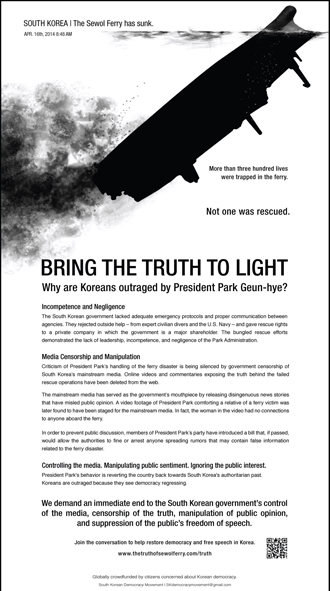 The full-page advertisement that was placed in The New York Times’ Sunday edition. [NEWSIS]

A group of Koreans in the United States ran a full-page advertisement in The New York Times’ Sunday edition criticizing the Park Geun-hye government’s incompetence next to an illustration of the Sewol ferry sinking in the water.

The advertisement, entitled “Bring the Truth to Light,” says that no one was rescued among more than 300 trapped in the ferry and that Koreans are “outraged” by Park Geun-hye.

The ad also demanded an end to the Korean government’s control of the media, censorship of the truth, manipulation of public opinion and suppression of the public’s freedom of speech.

The idea for the ad came from members of Missy USA, an Internet site for married Korean women residing in the United States. Money was raised by the crowd-funding website Indiegogo.com between April 29 and May 9.

Contributors to the campaign said they plan to hold rallies in large cities on the East Coast of the U.S. to offer condolences for the victims of the ferry disaster and to criticize the Korean government.

The campaign organizers said in a statement on Indiegogo.com that they “want the world to know the ugly truth in the current administration, and hope the ad would help start the conversation to bring changes in Korea.”

The ad got a mixed response back in Korea. While conservatives condemned it as treachery and an act of agitation, liberals claimed the Park administration deserves such humiliation abroad given the extent of its wrongdoings.

The ruling Saenuri Party yesterday expressed concerns about the campaign overseas, defining it as “instigation.”

“When some people believe that political factions are trying to instigate the public, we need to be much more cautious,” Hwang Woo-yea, president of the party, told the members of its Supreme Council yesterday. “I am extremely worried that those factions are perpetrating various acts of sedition via overseas media.”

Lee Wan-koo, the party’s new floor leader, said going so far as to publish an advertisement criticizing the Korean government at a difficult time will hurt other Korean-Americans who are deeply anxious about their home country.

But some Twitter postings defended the ad, saying it simply asked the Korean government to disclose the truth.