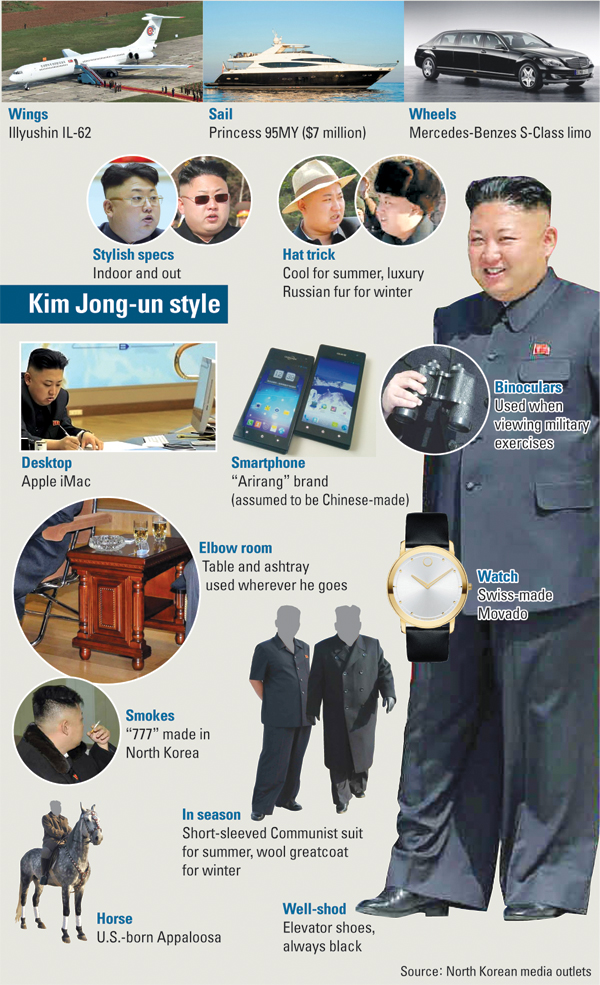 The private jet of North Korean leader Kim Jong-un has been refurbished.

A month after the jet was first shown in the state media, the airliner again appeared on Korean Central Television with a totally different design: the words “Democratic People’s Republic of Korea” were inscribed above the windows of its white-painted body in blue hangul and the national flag decorated its side.

The new design was apparently modeled after the United States’ Air Force One.

North Korea’s official broadcast media Saturday showed Kim and the first lady, Ri Sol-ju, getting off the plane, without mentioning the exact date of their voyage or which airport they landed at. It only described the venue as “a strategic airfield in the western district.”

Walking on a red carpet with his wife, Kim saluted North Korean Air Force soldiers in an honor guard in front of the jet.

South Korean intelligence officials confirmed the ceremony was held on Friday morning through wiretapping, although they said they found something weird after tracing its flight.

According to the Seoul officials, the couple boarded the plane at Pyongyang’s Sunan International Airport, 22 kilometers (13.6 miles) away from Kim’s office in central Pyongyang. They traveled to the airport in Kim’s limo, the officials said.

But the couple landed at Onchon Airport in Nampo, about 50 kilometers southwest of Pyongyang. It would take a jet only a few minutes to fly such a short distance, officials said. They assumed the short flight was part of a propaganda event for Kim to show off his leadership.

But despite its refurbishing, Kim’s private jet isn’t that impressive under the hood, the analysts said.

The redecorated jet was found to be an old Soviet-manufactured Illyushin IL-62, which was first made in 1963. It can carry a maximum of 186 passengers.

The jet is just one of the ways Kim Jong-un likes to get around.

Unlike his father Kim Jong-il, who was afraid of flying and relied on trains for his trips, the young leader allegedly enjoys using a small Cessna when he visits cities outside of Pyongyang, a Seoul source said.

On the roads, he used to ride a Mercedes-Benz sedan with bullet-proof windows, officials said. But recently he switched to a Mercedes-Benz S-Class limo. Sometimes he uses a Mercedes-Benz GL-63 AMG SUV, according to Seoul’s analysis of state media photos and footage.

When he visited a fishery run by the military in May 2013, state media showed his private yacht anchored at a port. The British-made yacht was found to be a luxury Princess 95MY, which costs about 8 billion South Korean won ($7.8 million).

His horse, which also appeared in state media, is a U.S.-born Appaloosa, known for its distinctive leopard pattern coat.

Pictures of the leader’s desk in state media show an Apple desktop computer, smartphone and car keys. He also uses the phone while driving on his own, according to the media.

Kim previously used an HTC phone made in Taiwan but recently he switched to an unidentified model with an “Arirang” logo. Seoul officials assume the phone was made in China and the logo is fake.

It’s not known why Kim, who publicly denounces the United States and calls Americans “imperialists,” uses an Apple desktop computer. A Lincoln Continental limousine carried the coffin of his father’s body during his funeral.

Unlike his father, who only wore a Communist-style jumpsuit and mundane black sunglasses, Kim wears a Swiss-made watch by Movado, a brand his wife also favors, and a variety of spectacles and sunglasses.

Seoul analysts assume that his fashion coordinator is younger sister Kim Yo-jong, a rising power in the Communist regime.