In Sogong, fate of a ‘golden plot’ hangs in balance

In Sogong, fate of a ‘golden plot’ hangs in balance 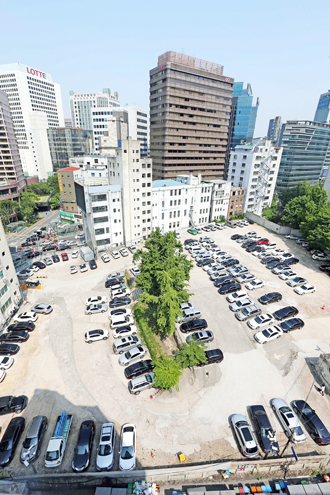 An aerial view of the “golden plot” in Sogong-dong, Jung District, Seoul. Samwhan Corporation previously owned the plot and four of the seven buildings before it was sold off to Booyoung Group in 2012. By Oh Jong-taek

In Seoul’s Sogong neighborhood, in Jung District, a “golden plot” sits in the midst of modern, streamlined buildings.

Seven old, dilapidated edifices stand in a row, just in front of a temporary parking lot. Although the land, measuring 6,562 square meters (1.6 acres), is worth about 300 billion won ($293 million) at market price, it is officially valued at 85 billion won.

The residents who live nearby say that those properties feel like a part of the 1980s that have been preserved in the middle of 2014.

And to an extent, they’re right. The seven buildings were constructed between 1963 and 1975, when Park Chung Hee was president. The price and financial potential are surprising, yet the plot has remained undeveloped for nearly 15 years.

According to sources from the Seoul Metropolitan Government, the owners of those buildings are anonymous. 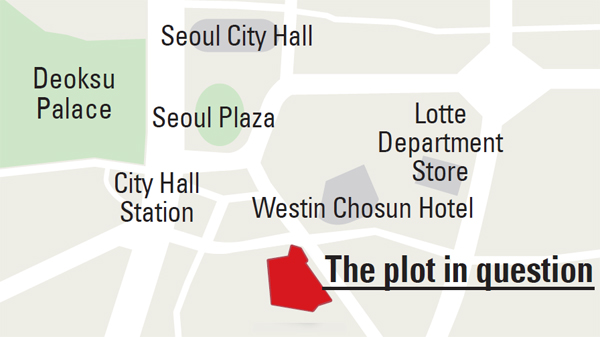 The land was previously bought up during the 1980s by the Samwhan Corporation, one of the leaders in the Korean hotel industry at the time, along with four of the seven buildings.

The plot was the perfect location for a five-star hotel targeting Chinese and Japanese tourists, especially since it was just within walking distance to Gyeongbok and Deoksu Palaces, Seoul Plaza, Namsan and even the popular Myeong-dong area.

“Samwhan Corporation was buying lands to build a hotel near Myeong-dong, but the company faced financial difficulties after the 2008 financial crisis and was put under legal management,” said a source from the Seoul Metropolitan Government.

“Booyoung Group, a construction company, bought the empty lot in Sogong-dong immediately after it was put on the market,” he said.

Booyoung Group purchased the lot for 172.1 billion won in August 2012. It was rumored then that Samsung C&T Corporation and the Shilla Hotel were planning to buy it for 160 billion won through an open bidding process, but Booyoung Group swept in and scooped it up ahead its competitors, paying 10 billion won more than its challengers.

Coldwell Banker K-Realty, a real estate franchise in the United States, estimated the commercial value of the property to be around 512.5 billion won, with 112.5 billion won in investment and a 5 percent annual profit rate.

Booyoung Group formerly said that it would build a hotel on the land, but three of the buildings’ owners refused to sell. According to Booyoung Group, one of the owners declined because he has grown fond of his property, and the two others were asking for twice the market price.

Last year, however, one the two abruptly sold his building, and the new owner apparently took out a 3.6 billion won mortgage for the new property, according to the certified copy of the property registration.

But come this July, a turning point is expected in the long-standing conflict among the three building owners, Booyoung Group and the Seoul government. That would likely follow a new plan by the city, which is anticipated to start a second district plan to develop the Myeong-dong and Bukchang-dong areas.

The city government and Booyoung Group expect that the new development plans will be a boon for business. But the owners of the three remaining buildings also see a worthwhile opportunity in holding onto their property for the time being.

“The building owners might face financial damage if Booyoung Group carries out its hotel construction plans without purchasing those buildings,” said Park Dae-bum, the director of property management department at Coldwell Banker.

“But we can’t blame [the building owners] for staunchly claiming their rights to their properties.”

He added that the three proprietors had an incentive to hold on to their properties amid talk of upcoming development, as waiting to sell would likely guarantee them a higher buying price.

In 2005, the Sogong neighborhood was designated a special development district under the city government’s initial proposal. The policy also relaxed restrictions on height and floor-area ratios for development companies that contributed part of their land to the city government for pedestrian pathways or roads. However, because there was no development for more than five years, the project is set to be re-examined and carried out again.

Seoul will finalize its revised development plans this summer.