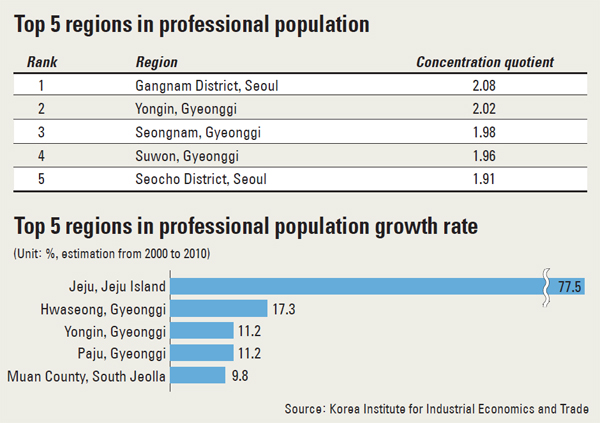 Gangnam District ranks as the No. 1 region in the country for the most residents with “creative class” occupations, according to a report released yesterday by the Korea Institute for Industrial Economics and Trade.

Behind Gangnam were Yongin and Seongnam, both in Gyeonggi.

Daejeon was the only city outside the Seoul metropolitan area in the top 10, thanks to its special science and technology R&D zone in Yuseong District.

The study was conducted based on three occupation categories as part of the “creative class” theory developed by Richard Florida, a business economics professor at the University of Toronto. The categories are the “creative core,” which generates new value and content and includes scientists, engineers and IT professionals; “creative professionals,” including public and private sector managers, lawyers and financiers; and “Bohemians” engaged in culture and sports.

The report said creative professionals tend to reside in urban areas where manufacturers and professional service providers, including legal and consulting firms and R&D centers, are based.

Major metropolitan cities grew only 1 percent, largely due to an exodus of creative professionals to midsize cities, according to the report. Counties saw 9 percent of their innovation leaders move to midsize cities.

The report explained that midsize cities enjoyed a high growth rate, thanks to industrial development initiatives. Paju, Gyeonggi, showed 11.2 percent population growth, fourth highest in the study, as the government made it a technology cluster for the display industry.

However, Kim Young-soo, a fellow at the institute’s Research Center for Regional Development, emphasized the study showed that balanced regional development is a more efficient way to attract membersof the creative class to an area, because they tend to choose places that offer a good quality of life.