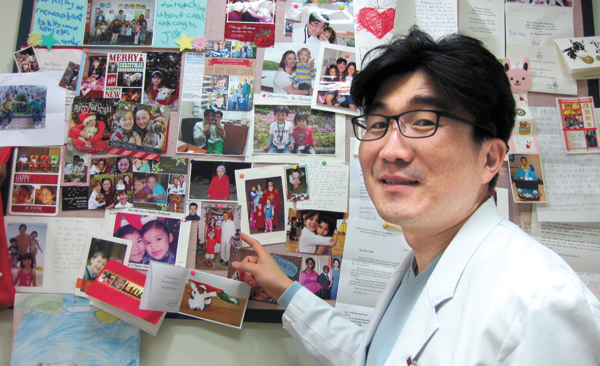 Dr. Yoo Byung-wook from the International Clinic of Soonchunhyang University Hospital gestures to his office wall covered with photos and letters from international patients. By Wi Moon-hee

On Labor Day earlier this month, Dr. Yoo Byung-wook’s office in the International Clinic of Soonchunhyang University Hospital in Hannam-dong, central Seoul, was crowded with international patients from India, Denmark, the Philippines, Mauritius and other lands.

Yoo, 40, the head of the clinic, was seated against a wall covered with photos of himself posing with patients from all around the world, along with letters of gratitude they sent him.

“The two main concerns people have when they move abroad are selecting their children’s school and finding a doctor for medical treatment,” he said. “When those two issues are settled, their new home becomes a great place to live.”

The reason Yoo has such a long queue of patients is that he can speak five foreign languages: English, Spanish, Portuguese, French and Japanese. Born in Seoul and having graduated from only local schools, he credits a childhood in which he frequently had the opportunity to travel abroad.

Yoo learned English by visiting his mother’s family members who were living in Australia. Japanese came naturally, he said, after spending time with his father, who studied in Japan. During high school, he enrolled in a French hagwon, or private academy.

He learned Portuguese from patients from the Embassy of Angola in Seoul. And while working as a physician for the Korean International Cooperation Agency in Peru from 2003 to 2005, he was able to pick up Spanish.

“When it comes down to surgery, technique is crucial,” Yoo said. “But patients also need a peace of mind that comes from effective communication.”

An Egyptian diplomat that Yoo knew was diagnosed with terminal colon cancer while working in Korea. He couldn’t get proper treatment in his home country, so he relied on Soonchunhyang University Hospital. Yoo says his patient has been cured and is in great shape.

After working for seven years at the International Clinic, Yoo recently published “Dr. Yoo’s Manual for Conversational English in the Medical Office.”

“Local doctors can understand what their foreign patients are saying,” said Yoo, “but they can’t question them very well.” He explains that he wrote the book to teach doctors the kind of English that is most useful in the clinic.