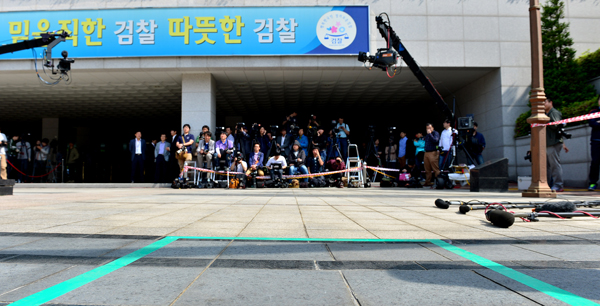 The patriarch of the family that allegedly controlled the operator of the sunken Sewol ignored a prosecution summons yesterday to answer questions about corruption and mismanagement and the role he may have played in the ferry disaster.

The Incheon District Prosecutors’ Office ordered Yoo Byung-eun to appear at the Incheon office by 10 a.m. yesterday. He didn’t show up.

Following Yoo’s defiance, the prosecution requested pretrial detention warrants for him, saying that the 73-year-old tycoon could flee or destroy evidence.

Authorities allege that Yoo and his two sons are involved in tax evasion, embezzlement and that their alleged misconduct led to poor safety management of the operator and contributed to the ferry disaster on April 16 that has left 284 dead and 20 still missing.

Multiple local media outlets reported that investigators were considering forcing their way into a religious facility where Yoo and his elder son may be hiding, but they didn’t as of press time.

Police traditionally refrain from forcing their way into religious establishments because it can provoke complaints of religious persecution.

Geumsuwon in Anseong, Gyeonggi, is the headquarters of a Christian sect led by Yoo. It became a potential battleground this week as police and adherents confronted each other.

The complex is known to have restaurants, shops and even an amusement park exclusively for believers. Members of the so-called Evangelical Baptist Church often gather there to pray together. Nonbelievers are banned.

Around 1,000 followers flocked to the complex yesterday, according to police, and camped outside to block police from entering.

The followers put up banners and placards condemning the government, police and investigators.

The relationship between Kim and the cult dates back to 1987 when the sect was ensnared in another controversy. At the time, Kim was the Justice Minister.

In August 1987, the bound and gagged bodies of 32 adherents of the sect were found dead, stacked in piles in a factory in Yongin, Gyeonggi, in what appeared to be a mass suicide.

Yoo Byung-eun was a minister and a leader of the sect.

Prosecutors investigated but concluded that Yoo was not directly involved in the deaths.

The adherents said this week that Yoo’s family members were not in the facility and accused authorities of trying to suppress their freedom of religion.

“We have nothing to do with the ferry disaster,” said the members of the sect in a statement on Thursday.

“The government tries to blame us to sway public criticism toward us, even though the government and Coast Guard are responsible for failing to save the victims of the ferry disaster,” the statement said.

The 73-year-old Yoo is the founder of the now-defunct Semo Group, the predecessor to the Chonghaejin Marine Company and widely considered to be the master of the entire family business empire.

Since the beginning of the investigation, prosecutors suspected that Yoo played a key role in pocketing company funds and leading to compromises in safety and maintenance.

The investigators are also looking into whether Yoo had prior knowledge of the overloading of ships operated by Chonghaejin. Yoo’s two sons - Yoo Hyeok-gi and Yoo Dae-gyun - ignored requests to come in for questioning.

The second oldest son, Hyeok-gi, currently lives in the United States and the police are seeking cooperation from U.S. investigation agencies. The prosecution said that it put the older son, Dae-gyun, on a nationwide wanted list, classifying him as a “Class-A” suspect. With that status, he can be arrested on the spot if found by police.

President Park yesterday met with representatives of families of the victims of the sinking to discuss their views and issues associated with the government’s handling of the crisis.

The president said she intends to reflect the families’ opinions in a public address scheduled for next week. The president will apologize and unveil plans to ramp up safety measures and compensation issues for the family in the address.

“Park heard different views and opinions so far, and proposed the meeting to hear directly from the bereaved families about the many problems they felt because she believes their opinions are the most important,” presidential spokesman Min Kyung-wook told reporters.

Representatives of the families called for a transparent and thorough investigation into the cause of the disaster, proposing that civilians be involved in the process. They also expressed the need for compensation for the bereaved families, who have taken time off of jobs following the disaster.