Disaster and the role of the media

Disaster and the role of the media 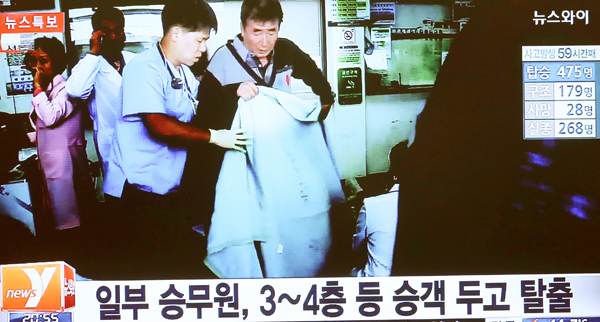 “The skies over Baghdad have been illuminated. We’re seeing bright flashes going off all over the sky.” CNN correspondent Peter Arnett covered the first Gulf War in 1991. CNN reporters shot scenes of the streets of Baghdad from a hotel room as the city was bombed. It signaled the beginning of an era in which wars are broadcasted live on television. And CNN became the star of international media.

However, the CNN reports were also criticized for representing a unilateral America-centered perspective and diluting the sense of guilt that should have been triggered by instead making the war look like a video game.

The September 11 terror attacks led to a shift away from disaster reporting that resembled a video game. Americans witnessed real destruction that they had only seen in movies or games. In particular, the moment the second aircraft crashed into the building was broadcast live. Viewers watched the collapse of the buildings and chaos in real time.

Media also played a key role during the East Japan earthquake of 2011. According to professor Lee Yeon of Sun Moon University, disaster reporting by the Japanese media was outstanding when Japanese government leadership was absent. While the Japanese Cabinet seemed confused, the media made prompt evacuation warnings and offered an accurate account of the damage and losses, providing sufficient information to help the disturbed public remain calm.

In research comparing the reporting in Korea, Japan and the United States on the earthquake, the Korean media highlighted the damage, used sensational and subjective language rather than focusing on facts, offered more breaking news rather than analysis and investigation and relied on government announcements rather than expert opinions.

The recent Sewol ferry disaster revealed the failure of the Korean media once again. The media continue to rely on breaking news and made a series of errors because they relied on government announcements. Confidence in the media has fallen, and the public is furious. Reporting on disasters has become a disaster.

Some media companies are experiencing internal discord as they reflect on their practices. KBS is having major issues. The former news chief made an inappropriate remark that infuriated the victims’ families, and he said that the president of KBS only follows President Park Geun-hye. The labor union and news directors are demanding the resignation of the KBS president.

At the same time, the Sewol ferry disaster was chronicled on smartphones and social network services beyond live broadcasting. The victims left their last records on their phones and SNS. Social media revealed its potential and limitations as an alternative media. Finding the proper role for media to play in a disaster is another task the ferry sinking has left us.


*The author is a culture and sports news editor of the JoongAng Ilbo.