Hologram of King of Pop plays at Billboard Awards

Hologram of King of Pop plays at Billboard Awards 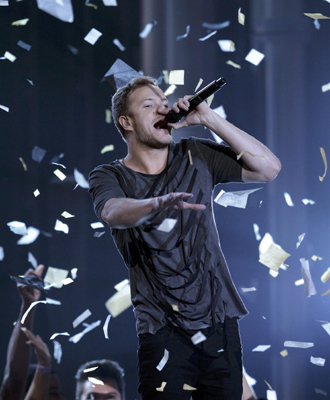 Timberlake, 33, who is on tour in Europe, accepted the awards in taped speeches with his touring band that numbers about 20 strong.

“It’s not a competition, but if it was, I won. And guess what? I’m OK with that,” Timberlake said in a good-natured joke aimed at his competition, singers Miley Cyrus, Bruno Mars, Katy Perry and Imagine Dragons.

The late King of Pop Michael Jackson made an appearance as a hologram, performing his posthumously released song “Slave to the Rhythm” with a slew of dancers moving around his computer-generated image.

The performance prompted an emotional standing ovation with some audience members shown wiping away tears.

R&B singers Thicke, Pharrell Williams and rapper T.I. scored four wins on the back of their megahit “Blurred Lines,” including awards for top Hot 100 song, digital song and radio song and R&B song.

Seventeen-year-old pop sensation Lorde, dressed all in black with black feather fringes, captured the award for top new artist and top rock song for the hit “Royals,” which already landed her two Grammy Awards this year. The teen, who has also won fans with her thoughtfulness and upending traditional standards of Hollywood beauty, said she was grateful to be able to mature in the spotlight and for the “dialogue around my work and myself.”

The Billboard Music Awards - which measures honors by sales, radio airplay, touring, streaming and other metrics - is a top venue for artists to unveil new songs in time for the summer.

Perry and Cyrus recorded performances from concerts in Britain to be shown at the awards. Cyrus performed a cover of the Beatles’ 1967 song “Lucy in the Sky with Diamonds” with Wayne Coyne, the singer of rock group the Flaming Lips.

Rapper Pitbull kicked off the show alongside Lopez and Brazilian singer Claudia Leitte from the MGM Grand Garden Arena with a performance of “We Are One [Ole Ola],” the theme to next month’s soccer World Cup in Brazil.