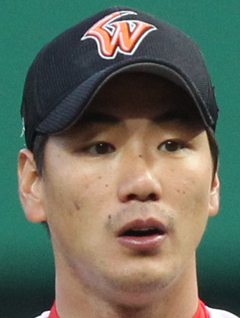 Prior to the 2014 Korea Baseball Organization season, SK Wyverns southpaw ace Kim Kwang-hyun was confident he would win at least 15 games, considering the left shoulder that frequently sidelined him the past three years was completely healed.

He was excited for the season to begin so he could show his stuff not only to the fans but to the scouts from Japan and the United States.

In March, 26-year-old Kim declared that he plans to make it to Major League Baseball.

Fans and media outlets were surprised because most players don’t say such things publicly, but none will be too surprised if Kim follows in the footsteps of his old KBO rival Ryu Hyun-jin. Ryu signed a six-year, $36 million contract with the Los Angeles Dodgers and was 14-8 with a 3.00 ERA in his first season last year.

Judging by Kim’s record so far this season, however, he has a long way to go to make his MLB dream a reality.

In the past three years, however, he was plagued with shoulder problems, winning a total of only 22 games with an average ERA of 4.53.

With his shoulder healthy again, though, it looks like KBO hitters have adapted to Kim’s two-pitch repertoire.

In the past five games, he posted a 6.11 ERA, allowing 39 hits in 28 innings. Opposing batters hit .336 against him over that span. Meanwhile, Kim’s pitch count per inning has ballooned to 17.8, the highest of his career and an increase of 1.6 from last year’s 16.2 pitches per inning.

Those statistics indicate hitters are sitting out on his hard stuff.

Ryu was also KBO’s two-pitch pitcher with his fastballs and changeups, but since he joined the Dodgers he has been throwing more sliders and curveballs.

While Kim knows how to throw curveballs and changeups, they aren’t effective enough to consistently get hitters out.

“The difference between Ryu and Kim was that Ryu had better third and fourth pitches, but he just didn’t have to throw them in the KBO. Kim just started learning breaking balls,” says analyst Song Jae-woo. “I think he really needs to add more weapons if he wants to play in a bigger league.”

Kim’s avowed goal is to be in the starting rotation of a Major League Baseball team, but that will be a long shot if he can’t develop more pitches.