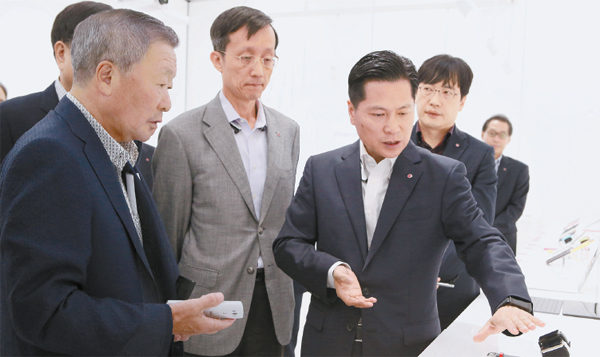 LG Group chairman Koo Bon-moo visited the R&D Center of LG Electronics in Seoul yesterday for a final design check on the LG G3 smartphone, according to the group.

The visit comes a week before the company is scheduled to unveil the product globally. The company confirmed yesterday that the G3 would be released in Seoul on May 28.

The smartphone, which reportedly has the world’s highest resolution display at 1,440X2,560 pixels, comes as the Seoul-based tech company strives to maintain its spot among the top 5 smartphone makers worldwide as it is challenged by fast-approaching Chinese companies.

According to Strategy Analytics, LG Electronics’ share of the global smartphone market was 4.3 percent in the first quarter, continuing its downward trend. LG slid from No. 3 to No. 5 when its market share slid from 5.2 percent in the second quarter of 2013 to 4.7 percent in the third quarter. Its shares fell further to 4.5 percent in the fourth quarter.

Chinese companies Xiaomi, and Coolpad are quickly catching up with LG. Last year, their market share was at about 2 percent, but they had 3.9 percent and 3.7 percent of the market share in the first quarter, respectively.

Kon, along with 30 top executives of the company also inspected about 60 other products set to be released by LG Electronics this year and next year at the R&D Center in Gasan-dong, southeastern Seoul, paying close attention to design, the group said.

LG Electronics said yesterday it wants to strengthen its competitiveness through design by creating a committee to determine customers’ preferences. Cooperation between the company’s designers and engineers will be also strengthened, it said.

“Design will play a central role in our efforts to create market-leading products and help us satisfy customers’ desire for sensibility and holistic user experience,” said Ahn Seung-kwon, chief technology officer, when he accompanied the chairman at the R&D center yesterday.